SEOUL, May 21 (Yonhap) -- Korean Air Lines Co., South Korea's biggest carrier by sales, said Thursday it has signed a deal to begin supplying 400 cargo doors to A350 planes in 2023.

In 2011, Korean Air received an order from Airbus to manufacture and deliver 800 cargo doors for the A350 aircraft, with 500 of them having been delivered to the European aircraft manufacturer so far.

In its latest deal with Airbus, the flag carrier supplied a cumulative 3,000 sharklets to the A320 series.

On top of flight services, Korean Air also manufactures aircraft parts and supplies them to Airbus and U.S. aerospace giant Boeing Co. It began to supply the parts to Boeing and Airbus in 1986 and 1987, respectively.

The company didn't provide the value of the supply contracts. 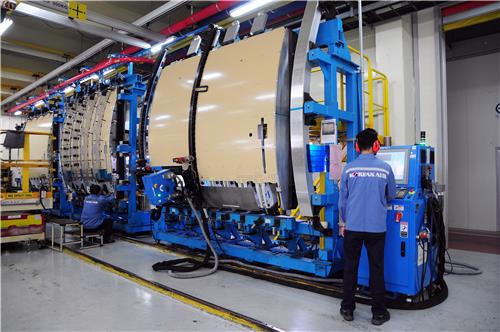