SEOUL, May 21 (Yonhap) -- A high school in Daegu, a southeastern city at the center of South Korea's first wave of the coronavirus epidemic, shut down Thursday just one day after its reopening, after one of its students tested positive for the virus, officials said.

According to the Daegu Metropolitan Office of Education, a Daegu Agricultural Meister High School senior residing in its dormitory has been confirmed to be infected with COVID-19, prompting authorities to close the school and force all other students to return home or be quarantined.

South Korean schools reopened Wednesday nationwide after five coronavirus-related postponements, and high school seniors were the first group to attend offline classes. The other primary and secondary students will return in stages to school by June 8. 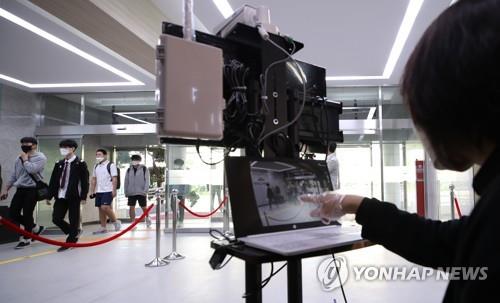 The Daegu agricultural high school, located in the city's Suseong Ward, about 300 kilometers southeast of Seoul, also resumed classes for its seniors the previous day.

The infected student, who lives in Gumi, North Gyeongsang Province, entered the school's dorm Tuesday afternoon before taking a coronavirus test the following day. The school was notified of the student's positive result prior to the beginning of Wednesday's first class.

In accordance with its quarantine manual, the school isolated 17 students residing in the dorm and the remaining 94 seniors were sent home. A total of 18 students who had direct contact with the infected student will take the coronavirus test. School facilities will be closed for two days for disinfection, while classes will be shifted back online.

School closures were also reported in other parts of the nation on the very first day of reopening.

In Incheon, west of Seoul, all senior students at 66 high schools were told to go home after two students were confirmed Wednesday morning to have contracted the virus.

About 60 students in North Gyeongsang Province, nearly 30 students in Gyeonggi Province and five in North Chungcheong Province were sent home or taken to hospitals after exhibiting symptoms of the virus, such as fever and sore throat, on the same day.

Meanwhile, at least three elementary schools in Yangcheon Ward, western Seoul, are reportedly considering postponing their plan to resume physical classes for their first and second graders next Wednesday, after one official from a church in the same ward has tested positive for the virus.

School officials fear that some of their students and their parents might have had contact with the infected church official over the weekend.