SEOUL, May 21 (Yonhap) -- President Moon Jae-in will forge ahead with inter-Korean cooperative projects to revive the Korean peace process amid the stalemate in nuclear talks between North Korea and the United States, his former top aide said Thursday.

In an interview with a local magazine, Im Jong-seok, a former chief of staff, also called for a summit between Moon and North Korean leader Kim Jong-un to break through the current impasse in relations.

"If there is no progress between the United States and North Korea this year, President Moon will try to push ahead to get things done, while sufficiently communicating with the U.S., even though there are negative views," said Im, Moon's first chief of staff who served until January 2019.

Moon has suggested inter-Korean cooperation to deal with the coronavirus outbreak as well as the resumption of a joint tour program and work to reconnect inter-Korean railways.

In a news conference on May 10 marking his third year in office, Moon said, "Now, South and North Korea should find and do what they can," not just waiting for progress in Washington-Pyongyang dialogue. 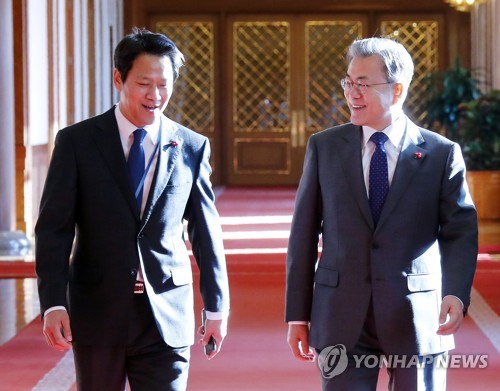 The proposed inter-Korean projects "can receive international consent and the U.S. won't object," Im said. He added Seoul needs to leverage its relations with China and Russia in pushing for the projects with the North.

Im urged the U.S. to be flexible on sanctions on North Korea to enable the proposed reconnection of railways and roads and forestry cooperation.

He also called for an inter-Korean summit, recalling the two leaders' agreement "to meet anytime when necessary."

"We can't just wait for Chairman Kim Jong-un's return visit," he said, referring to Kim's promise to visit South Korea in return for Moon's visit to Pyongyang in September 2018.

"If we discuss various situations and understand what difficulties the other party has, it will lead to better results." he said.

Moon and Kim held their third summit in Pyongyang from Sept. 18-20, 2018, and reached a set of agreements to reduce military tensions and improve relations.

"That summer, Stephen Biegun, the newly appointed U.S. special representative for North Korea, put pressure on us. We were told to hold on until he figured out the job and gave the okay," he said.

At that time, Seoul was actively communicating with Pyongyang and Washington to produce tangible agreements in the summit.

"It was difficult for us to accept. The president pushed ahead with the inter-Korean agreements on the establishment of a liaison office and military issues, and stamped his seal before Biegun came in. Biegun arrived in South Korea two days later," he recalled.

Im judged Kim as a man of "honest and confident character."

"After the first summit (between Moon and Kim in April 2018), I felt reassured and hopeful," he recalled. "I could find in him a firm commitment to solve problems with the president," he recalled.

"We should appreciate President Trump's efforts to get things done despite tremendous opposition from within," he said.
(END)