The rights issue is one of the options that Jeju Air has reviewed to raise operating capital needed to ride out the COVID-19 crisis.

Shareholders of the budget carrier will be given the rights to buy stocks to be sold in July at 14,000 won per share. The new shares will be listed on Aug. 4, the company said in a regulatory filing.

Shares in Jeju Air closed at 19,600 won on the Seoul bourse on Thursday, up 2.08 percent from the previous session's close. 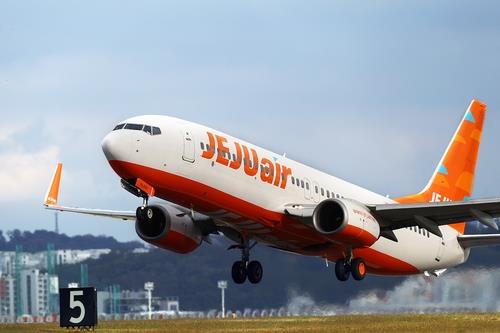 In February, Jeju Air implemented an emergency management scheme to stay afloat, as the COVID-19 pandemic has brought most international flights to a halt amid growing fears over the virus.

"The company is also considering selling airplane engines purchased for replacement and leasing them back to secure operating capital," a company spokesman said by phone.

Jeju Air swung to a net loss of 101.4 billion won (US$83 million) in the January-March quarter from a net profit of 42.1 billion won a year ago.

Vietnam and Thailand have yet to approve the combination of the two carriers.

Jeju Air signed a deal to acquire a controlling 51.17 percent stake in Eastar Jet from its parent Eastar Holdings Inc. for 54.5 billion won in March as part of its expansion strategy.

Once the two Southeast Asian countries approve the deal, South Korea's two state lenders -- the Korea Development Bank and the Korea Export-Import Bank of Korea -- are expected to inject 170 billion won into Jeju Air to help it continue operations amid virus woes.