WASHINGTON, May 21 (Yonhap) -- The U.S. Senate on Thursday confirmed John Ratcliffe as director of national intelligence despite objections from most Democrats.

The Republican congressman representing a district in Texas was confirmed by a 49-44 vote, making him the first DNI to not win broad bipartisan support, according to U.S. media.

Democrats have voiced concerns about Ratcliffe's independence as intel chief because of his previous support for Trump during the impeachment process and investigations into Russian interference in the 2016 presidential election.

During the confirmation process earlier this month, Ratcliffe said he believes North Korea continues to view nuclear weapons as "essential to protect the regime from military action and to gain standing in the international community."

In a written statement for the Senate Select Committee on Intelligence, he said: "North Korea may be willing to trade some nuclear and missile concessions for sanctions relief and other political and security benefits."

Those comments came as nuclear talks between Washington and Pyongyang have stalled for more than a year due to differences over how to match the North's denuclearization steps with U.S. concessions. 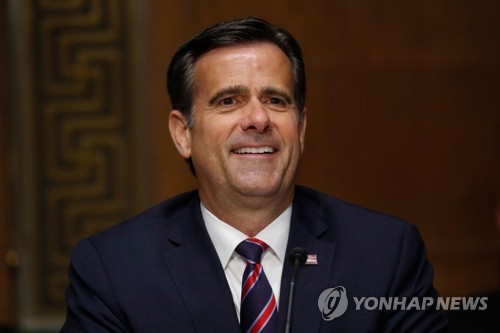