SEOUL, May 22 (Yonhap) -- The United Nations Command (UNC) is yet to provide a report to South Korea on its probe into a recent exchange of fire between South and North Korea inside the Demilitarized Zone (DMZ) zone, officials said Friday.

The U.S-led command, which administers the DMZ, was expected to issue the report of its investigation into the May 3 incident as early as this week. The incident occurred when more than four bullets from the North hit a South Korean guard post, leading South Korean troops to return fire. No casualties were reported from either side.

"We've not yet gotten anything regarding the issue," a senior defense ministry official said when asked if the ministry had received a report from the command.

Another official said whether, when and how the report could become publicly available depends on UNC.

On the day after the shooting incident, UNC said it dispatched a multinational special investigation team, with Swedish and Swiss members of the Neutral Nations Supervisory Commission, for field investigations.

The command said it will provide the report to the appropriate authorities once completed, which will determine whether there was any violation by South and North Korea of the Armistice Agreement that halted the 1950-53 Korean War. UNC oversees the enforcement of the agreement.

UNC did not answer Yonhap News Agency's recent questions as to whether it conducted a field inspection into the North Korean part of the DMZ and if it had talks with the North Korean authorities regarding the matter.

Pyongyang remains mum on South Korea's call for an explanation, though the South Korean and the U.S. authorities see the incident as accidental, not an intentional provocation. 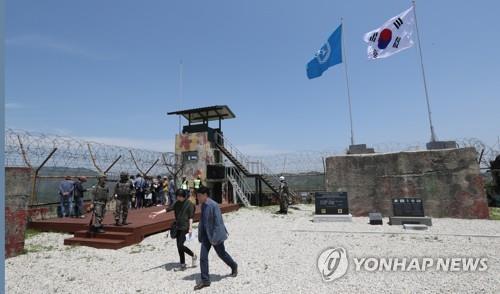