SEOUL, May 22 (Yonhap) -- Yoo Jae-soo, a former vice mayor of Busan, was given a suspended prison sentence at a Seoul court on Friday after being found guilty of taking bribes, mostly during his earlier stint at a financial watchdog.

The Seoul Eastern District Court sentenced Yoo to imprisonment of 1 1/2 years, suspended for three years, and a fine of 90 million won (US$72,820) after convicting him of bribery and solicitation.

Yoo was indicted last December for pocketing cash and goods worth some 40 million won in bribes from four people while he was working either at the Financial Services Commission (FSC), a state regulator of the financial services industry, or at the metropolitan government of Busan from 2010 to 2018.

Prosecutors demanded a five-year prison sentence for the 56-year-old Yoo in the previous court hearing in late April. 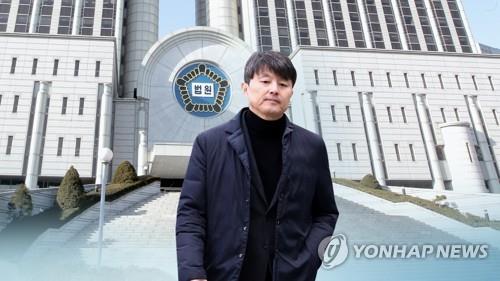 "It is very likely that the accused, as a civil servant at the FSC, was in a position to exert direct and indirect influence on those who offered bribes. Thus the bribes are deemed to be related to his duty," the district court in its ruling said.

"In addition, the bribers stated that they expected assistance from the accused in return. Therefore it is difficult to believe that the bribes were given due to special private relationships."

Yoo's alleged wrongdoings were initially subject to an inspection by the presidential office Cheong Wa Dae in 2017. However, that probe was later suspended, allowing him to avoid discipline and take office as Busan's vice mayor in 2018.

Yoo's case drew media attention as he had served in Cheong Wa Dae during the presidency of Roh Moo-hyun in the early 2000s and is known as a supporter of President Moon Jae-in.

Cho, who has been separately indicted on a dozen charges, including bribery, attended a court hearing early this month where he denied all charges, including the one related to the suspended inspection case for Yoo. Cho's lawyers argued in the hearing that the inspection team could not proceed with the probe against Yoo because it lacked the legal authority to conduct a forceful investigation.