SEOUL, May 22 (Yonhap) -- Five more foreign nationals have been deported from South Korea after getting caught violating self-isolation rules, the Ministry of Justice said Friday.

The violators -- two Chinese nationals and one each from Pakistan, Poland and Britain -- have been ordered to leave for their home countries after failing to comply with Seoul's mandatory self-isolation rule aimed at containing the new coronavirus.

Three of the five, who entered South Korea after April 1, when the mandatory self-isolation order took effect, were slapped with fines in addition to the deportation order, the ministry said, without identifying those fined. 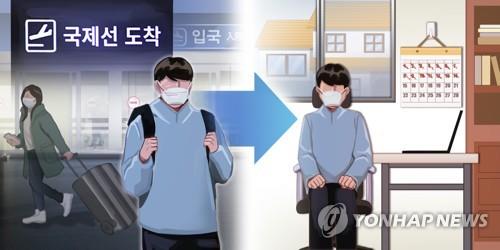 The ministry said nine other foreigners have been caught violating self-isolation rules unintentionally and were allowed to stay in the country after paying fines due to their low risk of spreading coronavirus.

According to the ministry, the deported Pakistani tested positive for COVID-19 after inviting friends to his self-isolation place for dinner on April 27, one day after he arrived here.

One Chinese national was caught escaping from a self-isolation place 11 times from April 14-28, each time after leaving his or her mobile phone behind to avoid being tracked.

Another Chinese national was accused of leaving a self-isolation place for 11 minutes on April 23 for a smoke. The person was also criticized for hindering self-isolation monitoring by intentionally hanging up or avoiding calls from civil servants.

The Polish national entered here March 10 and was ordered to self-isolate after one of the person's acquaintances contracted coronavirus. But the European took a walk in a public park almost every day from March 13 before testing positive on March 26. The authorities issued a departure order for the Polish national, instead of deportation, as the person had personally paid his or her own medical bill totaling 21 million won (US$17,000).

The British national was deported after being caught visiting a screen golf room one day after taking a coronavirus test on March 23 without wearing a face mask.