SEOUL, May 22 (Yonhap) -- The spiritual leader of South Korea's largest Buddhist sect on Friday labeled the new coronavirus pandemic a product of reckless development and ecological destruction caused by mankind, calling for harmony between humans and nature.

"The coronavirus disease that has broken out globally is the product of ecological destruction and pollution from mankind's reckless development, and also extreme greed and avarice," said Ven. Jinje, Supreme Patriarch, or Jongjeong, of the Jogye Order, in a sermon released ahead the order's Buddha's Birthday event.

This year's Buddha's Birthday was on April 30 but related ceremonies were postponed to May 30 due to the outbreak.

Ven. Jinje added, "Global handling of the pandemic has been futile, with the spiritual culture of the East attracting attention amid the helplessness shown by science technology."

The religious leader also stressed the importance of reaching harmony with nature.

"Heaven and earth and I are all of one root. All beings are of one body. We cannot exist without our neighbors, nor can we live without stepping on the earth," Ven. Jinje said.

The religious leader has led a campaign to popularize Buddhism as the spiritual leader of the Donghwa Temple in Daegu and as the Jogye Order's "Daejongsa," meaning "most eminent monk."

According to the Jogye Order's guidelines, Jongjeong is the highest authority in the Buddhist sect, but does not oversee its administration. The position must be chosen among Daejongsa who are aged 70 or older with 45 or more years of service. 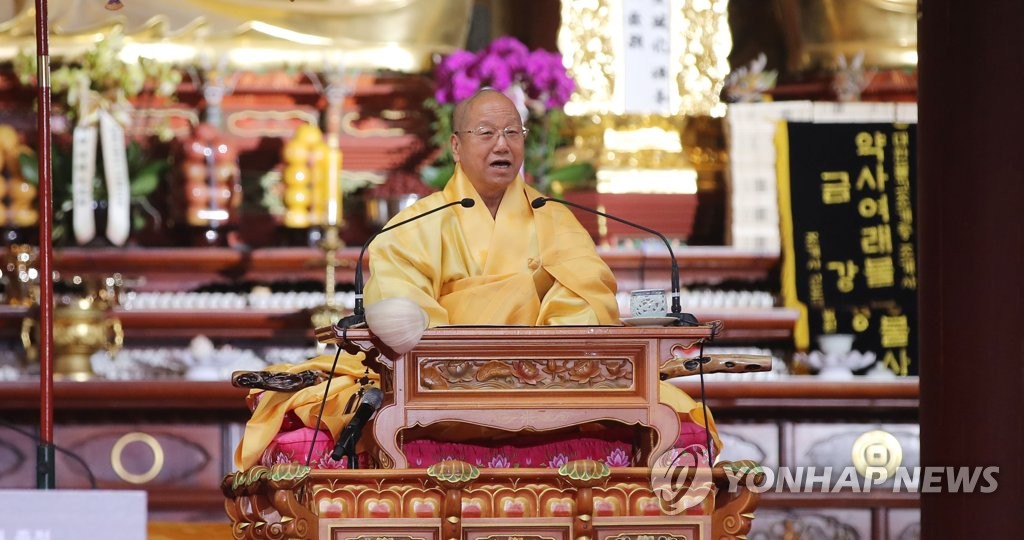