SEOUL, May 29 (Yonhap) -- Carrying two ice lattes and a blueberry scone, a courier leaves a cafe on the 18th floor of a building, passing through an automatic door before taking an elevator down to the fourth floor. The deliverer then uses an application to notify the customer that the order will arrive soon.

All this is done not by a human but by a chest-high autonomous robot designed to carry out a delivery job.

Dilly Tower is a self-driving robot currently under development by Woowa Brothers Corp., the operator of South Korea's top food delivery application Baedal Minjok, or Baemin, which launched a trial service of robot delivery at the company's headquarters in eastern Seoul earlier this month.

Moving at a human's walking speed of 1.2 meters per second, Dilly Tower moves entirely on its own, navigating inside buildings by using artificial intelligence (AI) technology that draws input from cameras around its rim to make deliveries based on preinstalled routes. 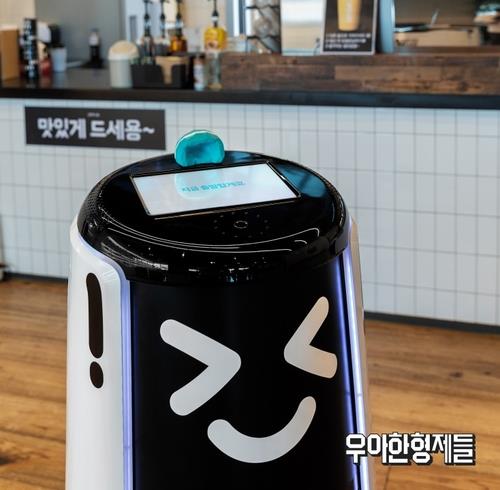 Increasing robot-based delivery services, along with automated systems, underscores a shift in humans' everyday life, and they are set to expand their presence as the new coronavirus pandemic fuels demand for such services with increased automation having greater impact on workforces in every industry, ranging from automobiles to food delivery.

A number of local companies, both big and small, have already expanded using robots as part of a globalwide social distancing campaign to reduce the number of workers who have to physically come to work.

Delivery services are one of the industries where the use of robots is likely to increase the most due to health concerns as more people want to minimize their contact with delivery workers and servers.

"There has been heightened interest in contact-free orders amid the ongoing wide spread of the novel coronavirus," said Kim Yo-seob, an official from Woowa Brothers in charge of robotics development. "Although unmanned delivery services existed before the COVID-19 epidemic, the virus outbreak is expected to promote its adoption."

CGV, a multiplex chain run by the country's entertainment giant CJ Group, also launched a zero-contact cinema at one of its branches in Seoul where everything is fully automated with no human staff coming in contact with customers.

Ticket machines and an automated self-service kiosk for popcorn and soda are open up off to the side. And 12 pick-up boxes are installed in front of the popcorn bar, with numbers on the doors, as employees prepare snacks after receiving orders from the kiosk and put them in the boxes.

"Demand for no-contact services have increased for the safety of customers due to the COVID-19 outbreak," Oh Dae-sik a CGV official, said.

In March, the company closed down 35 theaters nationwide following poor ticket sales. CGV reopened several of its branches recently but shuttered around 30 percent of its screens due to plunging profitability. 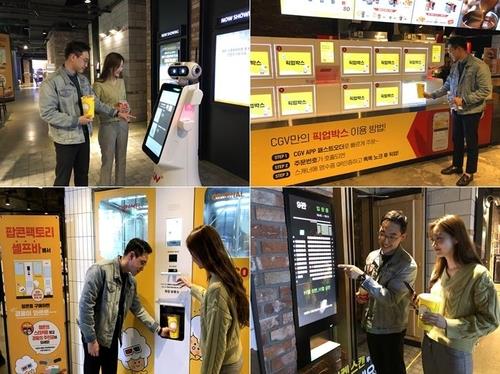 There is not a single human worker at the theater, where only two self-driving robots, called Check-bots -- which are about 1.5 meters tall -- wandering around the corridor to give customers information.

"We gather feedback from moviegoers and consider expanding the contact-free cinema system to other branches, which is expected to enhance the level of convenience for our customers, as well as the efficiency of the operation," Oh said.

With the intensive social distancing placed in workplaces for a few months, the COVID-19 outbreak has also hastened the need for a labor force for manufacturing facilities that does not get sick or quarantined.

POSCO ICT Co., an IT system unit of the country's leading steelmaker POSCO, has expanded its so-called smart factory where AI, big data and robots are fully placed.

Manufacturing facilities have traditionally relied on lines of human operators spaced close together, which has become a relatively tall order since the pandemic broke out.

"We plan to expand the system not only in the steel industry but also in various manufacturers, including chemicals, heavy industry and textiles," a company official said.

A report by the global consulting firm Boston Consulting Group showed that manufacturing robots currently complete about 10 percent of the total work, but the ratio is expected to skyrocket to 25 percent by 2025. 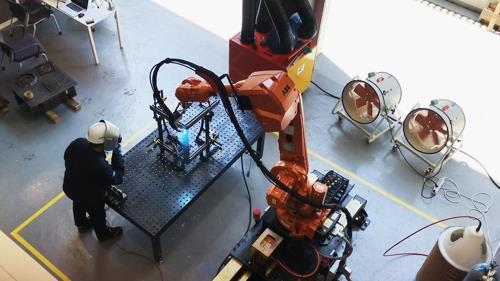 Previously, industrial robots in the local construction sector were mainly capable of conducting easy and repetitive tasks due to the delicacy of tasks that can only be done by human arms and fingers.

But the new industrial robot, with multiple joints, can follow the work pattern of construction workers based on a newly developed software.

The company plans to adopt complex industrial robots at construction sites on a trial basis with the goal of covering 20 percent of the workload by 2026.

Robots and automation have also expanded their territory in offices to carry out repetitive tasks, ranging from human resources and sales to purchasing.

Major tech firm LG Electronics Inc. plans to expand its so-called Robotic Process Automation (RPA) technology in up to 900 office-related tasks by the end of this year, sharply up from 400.

RPA technology, first adopted in 2018, is designed to carry out basic and repetitive tasks, and can complete higher-level tasks of analysis and comparison based on AI technology and big data.

"The technology currently replaces approximately 12,000 hours of human labor per month," a company official said. "The technology allowed the company to relocate many tedious and repetitive tasks to robotics technology."

A report by the Organization for Economic Cooperation and Development (OECD) shows companies that employ automation and robotics technology effectively are 10 times more productive than those that do not.

Experts say it is inevitable for more manufacturers and service providers to adopt automation and robots amid rising personal expenses coupled with continued falling prices of robots as the technology develops. 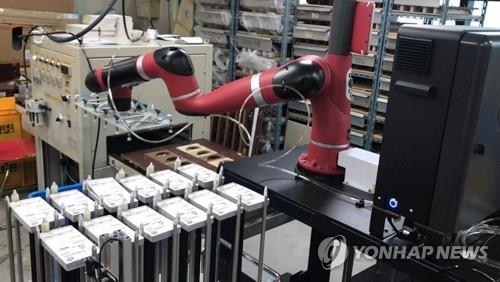 They, however, say these robots are not a new technology and still in a relatively early stage, with more time and research needed for the technology to mature and to achieve a full deployment.

"Dilly Tower is designed to help human riders not to fully replace them," said Kim at Woowa Brothers. "There are still many obstacles for Dilly Tower to be fully commercialized to make deliveries on roads."

A report by the World Robotics showed that South Korea had 631 robots per 10,000 human workers, indicating the highest density, largely thanks to the installation of a high volume of robots in the electronics and automotive industries.

South Korea, however, still ranks behind the United States, Europe and Japan in terms of robotics innovation.

In an effort to boost its international profile, the Seoul government plans to provide 1,500 robots with a budget of 127.1 billion won (US$102.4 million) this year.

The Ministry of Trade, Industry and Energy hopes that the robots will be adopted in manufacturing and four service industries where the technology is most needed.

"The post-pandemic world has many opportunities for robotics and automated systems due to increased interest in the contact-free era," said a ministry official, who asked not to be named. "We will support seeking a new-growth engine by utilizing robotics."