SEOUL, May 24 (Yonhap) -- Lotte Shopping Co., the operator of South Korea's biggest department store chain, said Sunday it will sell 121 brick-and-mortar stores within this year amid the new coronavirus impact on the retail industry.

Lotte Shopping runs about 700 department stores, large discount stores, supermarkets and LOHB's online shopping mall's offline stores, and was originally planning to sell 200 of them over the next three to five years to strengthen the e-commerce business.

"The company has decided to speed up the process to sell less-profitable assets to improve its financial health that's been affected by the coronavirus outbreak," a Lotte Shopping official said. 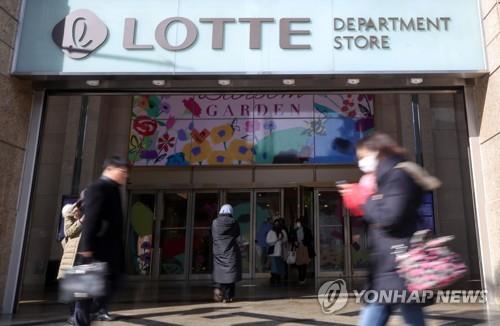 In a conference call on May 14 after the release of its first-quarter earnings results, Lotte Shopping said it will shut down five department stores, 16 discount stores, 75 supermarkets and 25 LOHBs outlets by December.

Lotte Shopping shifted to a net loss of 43.33 billion won (US$35 million) in the January-March quarter from a net profit of 109.17 billion won in the year-ago period.

The company said there will be no forced layoffs during the asset sales process, but some job cuts are widely expected at the subjected stores.

This month, Lotte Shopping said it will strengthen its e-commerce business based on its integrated online shopping website to meet rapidly changing customer appetite after reporting poor first-quarter earnings results.

Local retailers have suffered a sharp decline in sales as people opt not to visit offline stores and to stay at home due to virus fears.