SEOUL, May 25 (Yonhap) -- With mergers and shakeups, rival political parties are quickening steps to consolidate their party fronts in the run-up to the start of a new parliamentary term this week.

The unicameral National Assembly is set to kick off its 21st four-year term Saturday, slightly over midway through President Moon Jae-in's five-year term.

After securing a mega majority of 180 seats in the 300-member chamber in last month's general elections together, the ruling Democratic Party (DP) and its sister group, the Platform Party, merged last week, further solidifying their power base ahead of the chamber's resumption.

The DP will control 177 seats in the parliament after losing three lawmaker-elects on proportional representation seats -- two returned to their minor parties and one was eliminated over allegations of real estate speculation.

The ruling DP's grip on the parliament, which would give it almost free rein at the National Assembly, is likely to provide a stable footing for Moon to continue his policy visions amid the country's efforts to fight the new coronavirus pandemic and its economic fallout. 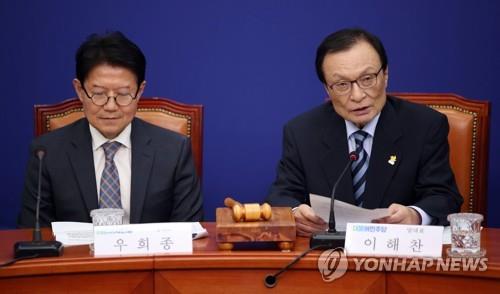 Last week, the DP also chose six-term lawmaker, Rep. Park Byeong-seug, as the new National Assembly speaker to lead the chamber for the next two years, following the local chamber's time-honored practice of reserving the seat for the ruling party.

After losing big in the recent elections, the main opposition United Future Party (UFP) is also recovering from the shock, having confirmed the election of Kim Chong-in as the chairman of the party's emergency leadership body last week.

The retainment of Kim, who steered the UFP's recent election campaign, despite the party's crushing election defeat hints at its desperation to shake itself up.

Officially taking office next Monday, the veteran politician who has worked for both the conservative and liberal political blocs is reportedly planning a drastic leadership reform aimed at shedding the UFP's "ultra right" party image.

Kim is reportedly planning to fill four of the emergency leadership committee's nine-member seats with outside experts in their 30s and 40s as part of a reform drive.

The young blood is likely to be Kim's backup in his efforts to bolster the party's platform in economy, welfare and employment. 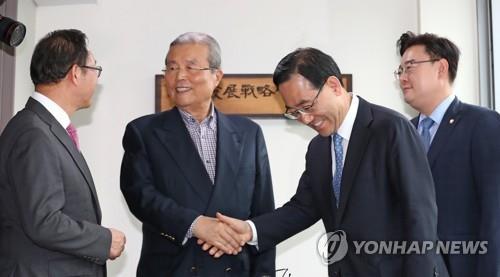 Also this week, the UFP and its satellite organization, the Future Korea Party, created as part of an election strategy, plan to merge so that they can control a combined 103 parliamentary seats against the ruling party's 177 majority.

As the rival parties quicken steps to open up the new chamber, their leaders are also on course to start negotiations to form parliamentary committees.

The floor leaders of the DP and the UFP are set to officially kick off the difficult negotiations Tuesday to pick the chairmen of the assembly's 20 standing and special committees by June 8 as legally required.

The opening of the new chamber is, however, likely to be overshadowed by a series of controversies between the two rival parties.

Stepping up its call for the resignation of DP lawmaker-elect Yoon Mee-hyang, the UFP will launch the first meeting of its task force on a growing scandal on Yoon later in the day.

A long-time activist for the victims of the imperial Japanese military's wartime sexual enslavement, Yoon is facing growing allegations that she and her activist group misappropriated donation funds dedicated to the victims and maltreated them.

The DP remains adamant that it will retain her until her alleged wrongdoing is factually verified.

In defiance, the UFP is planning to push for an official parliamentary probe into the scandal, apparently placing itself on course to lock horns with the DP.

Another pressing bipartisan row may dominate the initial phase of the new parliamentary term, with the DP and the UFP competing for the chairmanship of the assembly's key committees, including those on legislation and judiciary, as well as budget setting.

"The DP will pursue negotiations (with the UFP) with the awareness of the change in the National Assembly lineup where the DP controls 117 seats and the opposition 103," the ruling party's deputy floor leader Kim Young-jin said after a meeting with his counterpart Sunday.

"I expect the ruling party to be open and to care for the minority opposition party, going beyond the simple numbers game," UFP deputy floor leader Kim Sung-won said, adding that he will work hard to close opinion gaps between the parties.