SEOUL, May 25 (Yonhap) -- South Korean shares closed sharply higher Monday on hopes of massive economic stimulus steps sought by the local government. The Korean won fell against the U.S. dollar amid the growing tension between the United States and China. 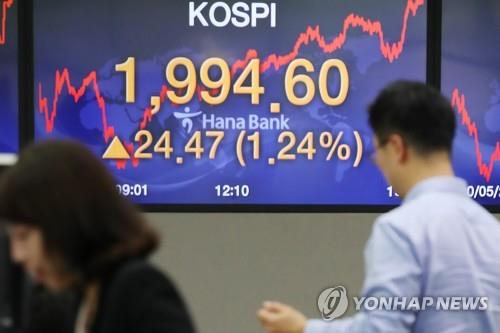 The index got off to a firm start on renewed hopes of a vaccine for the new coronavirus.

Dr. Anthony Fauci, director of the U.S. National Institute of Allergy and Infectious Diseases, said the U.S. was on track to develop new coronavirus vaccines by late December at the earliest.

"Although the U.S.-China dispute dragged down Wall Street last week, China's emphasis on U.S. commitment for the phase-one trade agreement has given investors the impression that the tussle will not lead to a tariff bomb," Noh added.

"The bottom of the global economy is invisible. This is indeed an economic wartime situation," the president said in an annual national fiscal strategy meeting.

Bond prices, which move inversely to yields, closed higher. The yield on three-year Treasurys shed 2.2 basis points to 0.815 percent, while the return on the benchmark five-year government bond slipped 3.2 basis points to 1.050 percent.