"The current size of infections is something that our quarantine system could manage sufficiently," Moon was quoted by the prime minister's office as saying during his regular meeting with Prime Minister Chung Sye-kyun.

"As there is an everlasting possibility of group infections under the (eased) social distancing regime, (the government) should focus on speedily detecting and isolating patients to prevent further spread of infections," Moon told Chung.

South Korea reported 16 new COVID-19 cases Monday, including 13 local infections, the first daily number under 20 after hovering around the threshold for the past three days.

Most of the new cases reported Monday were traced to the cluster infection from the nightlife district of Itaewon in Seoul.

The Moon-Chung meeting zeroed in on government efforts to contain the club-related cluster infection as well as precautionary measures under way at schools and the distribution of protective facial masks, the prime minister's office said.

After in-person classes began for high school seniors last week, more students will return to school in phases by June 8.

The president and the prime minister agreed that a policy shift is necessary to the country's current mask rationing system, under which a person is entitled to purchase three government-distributed masks every week.

With that in mind, the government plans to review an extension of the current distribution system, which is set to expire on June 30, as well as ways to allow mask manufacturers to increase their overseas sales, the office said.

The government will also find ways to increase the manufacturing and distribution of lighter masks ahead of the coming of the summer season, according to the office. 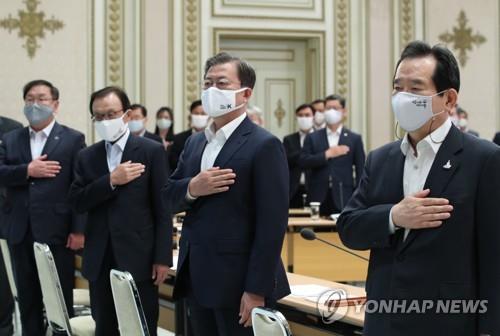