SEOUL, May 26 (Yonhap) -- South Korean chemical giant LG Chem Ltd. said Tuesday it will carry out emergency checks on all of its plants as part of efforts to strengthen safety following a deadly accident in India.

LG Chem said safety experts will inspect 40 plants -- 17 in South Korea and 23 in foreign countries -- by the end of June.

"We will never push for projects unless their environmental safety is guaranteed," LG Chem Vice Chairman and CEO Shin Hak-cheol said in comments provided by the company.

LG Chem will also consider pulling out its ongoing businesses if it is difficult to secure their environmental safety.

The safety checks are meant to come up with a list of all possible accidents and put in place safety measures, according to LG Chem.

The move came more than two weeks after a gas leak has killed 12 people and sickened more than 1,000 near the LG Polymers chemical plant in the southern Indian state of Andhra Pradesh. 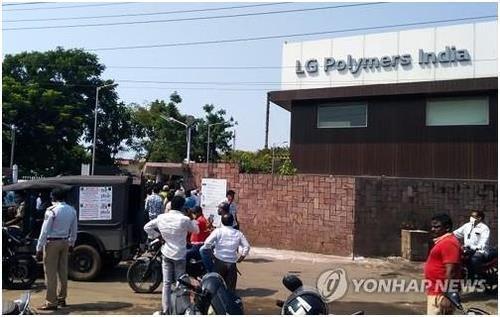 LG Polymers India has said its initial investigations suggested that the cause of the incident is the leaking vapor from the styrene monomer storage tank.