SEOUL, May 26 (Yonhap) -- As the first woman to take office this week as vice speaker of the country's National Assembly, four-term lawmaker Rep. Kim Sang-hee has pledged her dedication to shattering a parliamentary glass ceiling for women.

"I want to contribute to expanding female participation in politics. There's still a very solid glass ceiling at every corner (of the National Assembly)," Kim said in an interview with Yonhap News Agency on Monday.

A day earlier, the ruling Democratic Party (DP) officially promoted Kim as a deputy speaker to lead the 21st National Assembly during the first two years of its four-year term. The seats of the parliamentary speaker and the other vice speaker went to the DP's Rep. Park Byeong-seug and the main opposition United Future Party's Rep. Chung Jin-suk.

The decision makes Kim the first female ever to assume a leadership position in the National Assembly's 70-year history. 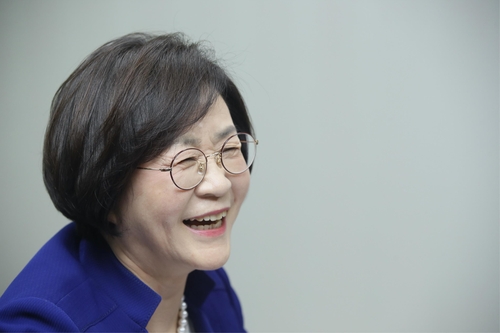 Kim stressed that the share of female seats at the chamber remains at 19 percent, falling far short of the 30 percent share recommended by the Public Official Election Act.

"When it comes to the leadership at government organizations, the share hovers around 3 percent," she said, adding that the parliament needs to reform the election law in a way that allows more women to win more proportional representation seats.

Under the current election system, it is very difficult for women and minority political parties to make it to the National Assembly, she explained.

Many female issues, including a high-profile online sex crime case where dozens of young women were coerced into performing obscene acts, tend to be addressed by the chamber only retrospectively, the lawmaker pointed out.

"I will work hard to have the National Assembly address female issues in a proactive manner," she said.

Having more female seats in the chamber is "not a matter of competition between the male and female sexes," she said.

"The 19 percent female representation at the chamber when women account for half of the population means representative democracy is still a far cry."

Kim described her upcoming mission as a symbol of the growing population of female politicians.

"It constitutes the Democratic Party's first political action for the 21st National Assembly, which was made to repay the favor the public did for the party by making it a majority party," she said.

Repeating her party's growing call for a reinvestigation into the illegal political fund case involving former liberal Prime Minister Han Myeong-sook, Kim said a retrial on the case is necessary for justice.

Han was sentenced to a two-year prison term with a court order to forfeit nearly 900 million won (US$727,860) in 2015 under the reign of the former conservative government led by President Park Geun-hye. 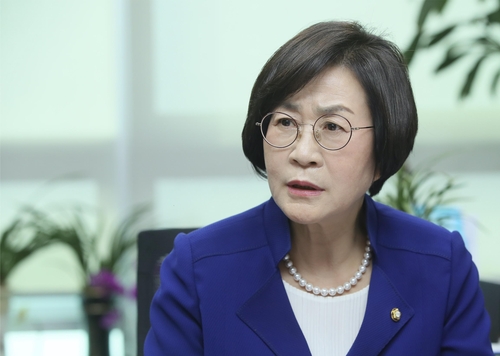