SEOUL, May 26 (Yonhap) -- Jin Air Co. and other low-cost carriers plan to resume flights on some international routes next month to cater to incoming passengers and meet cargo-carrying demand.

Jin Air plans to restart flight services on routes from Incheon to Bangkok, Taipei, Narita, Osaka and Vietnam on June 1, to bring overseas Koreans, those studying abroad and businessmen to the country, the company said in a statement.

The company said it will operate one to two flights a week to the five cities from June to also meet cargo-carrying orders, it said. 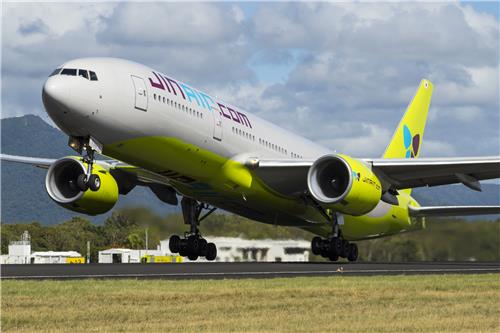 Jin Air has suspended all of its international flights since April, as countries strengthened entry restrictions on incoming passengers to stem the spread of the new coronavirus. But seven domestic routes have been in service despite the virus outbreak.

It offered flights on 32 international routes to cities that include Guam, Hawaii, Shanghai and Hong Kong before the COVID-19 pandemic hit the airline industry.

Among other budget carriers, Jeju Air Co. plans to resume flights to Manila, the Philippines, next month. It currently serves three international routes to Tokyo, Osaka and Weihai, sharply down from 82 at the end of 2019.

Air Busan Co. and Air Seoul Inc. are planning to gradually resume flights on international routes from July. The two budget carrier affiliates of Asiana Airlines Inc. have suspended all of their international flights since February.

The country's budget carriers, except for Eastar, are running most of their domestic routes despite virus fears.

As for full-service carriers, Korean Air Lines Co. and Asiana Airlines plan to resume flights on dozens of long-haul routes next month.

The planned resumption comes as they strive not only to offset decreased passenger travel demand with increased cargo delivery demand but also to prepare for revived travel demand after countries ease entry restrictions on incoming passengers.