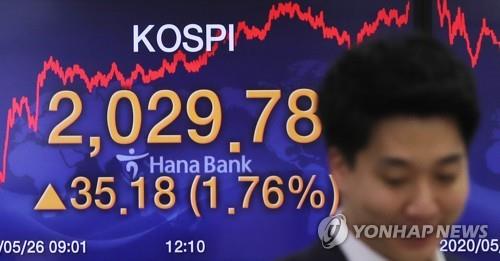 The index got off to a strong start and extended gains throughout the day. The gains were largely buoyed by the rollbacks of the coronavirus-incurred economic lockdowns, particularly in Europe, analysts said.

"The major economies are pushing for economic reopening ahead of the holiday season, especially among the tourist-rich regions in Western Europe," NH Investment & Securities analyst Noh Dong-kil said.

"Spain decided to lift the two-week self-distancing orders for local visitors starting July, while Greece allowed restaurants and cafes to resume operations on condition of keeping a certain distance," he added.

Bond prices, which move inversely to yields, closed lower. The yield on three-year Treasurys rose 2.4 basis points to 0.839 percent, and the return on the benchmark five-year government bond gained 3.0 basis points to 1.080 percent.