SEOUL, May 27 (Yonhap) -- South Korea should propose video family reunions with North Korea next month to commemorate the 20th anniversary of the first-ever inter-Korean summit in 2000, a top expert on North Korea said Wednesday.

Suh Choo-suk, who also served as vice defense minister from 2017-2019, made the remarks during a forum, citing family reunions and coronavirus cooperation as among the most viable options for inter-Korean cooperation.

"At a time when it's difficult to meet face-to-face, I think we need to push ahead with a video meeting," he said during the forum hosted by the Institute for National Security Strategy. "This is not directly related to international sanctions."

The two Koreas held the first-ever summit of their leaders in 2000 between then-South Korean President Kim Dae-jung and North Korean leader Kim Jong-il. The two leaders adopted what is known as the "June 15 Joint Declaration," pledging to work together for peace.

Suh stressed that video reunions of families separated by the Korean War are a practical approach during the coronavirus pandemic, saying South Korea is ready with the necessary equipment and the meetings are not subject to global sanctions.

"The coronavirus situation is very unique as the countries are putting all efforts into social distancing. It's not just inter-Korean relations that are at an impasse; it has affected all other diplomatic relations," Suh said. 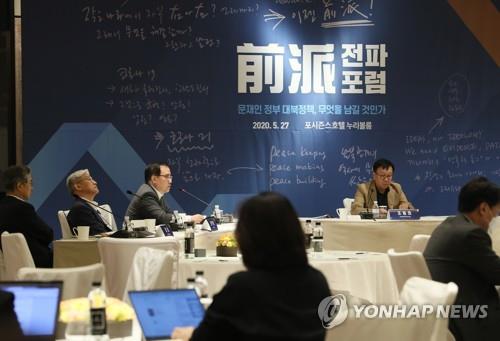