SEOUL, May 28 (Yonhap) -- South Korea's exports of cosmetics grew at the slowest pace in eight years in 2019 amid a litany of unfavorable external factors, industry data showed Thursday.

Overseas shipments of cosmetics stood at US$6.49 billion last year, up 3.6 percent from a year earlier, according to the data from the Korea Cosmetic Industry Institute.

Driven by the popularity of Korean pop culture, cosmetics exports had been on a roll, with overseas shipments soaring more than 50 percent in 2014 and 2015. Exports surged 44 percent in 2015 before slowing to 18.3 percent in 2017. 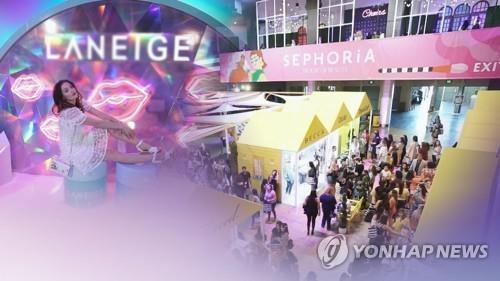 Last year's weaker growth was attributed to the Sino-U.S. trade war, increased uncertainty over Britain's separation from the European Union and the slowing global economy.

Imports from France were the largest at $463 million, up 2.4 percent from a year earlier, while those from Japan dipped 18.5 percent to $209 million.
(END)