SEOUL, May 28 (Yonhap) -- Creditors of Korean Air Lines Co. have demanded the cash-strapped airline raise capital of 2 trillion won (US$1.62 billion) by the end of next year in return for fresh financial support, officials familiar with the issue said Thursday.

The KDB will shoulder 60 percent of the financial aid, with Exim Bank responsible for the remainder. 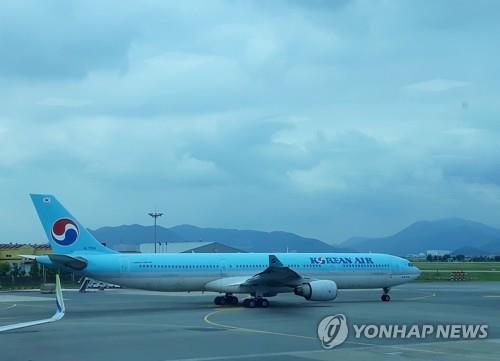 Last week, Korean Air said it will push to carry out a share sale worth 1 trillion won and is seeking to sell assets, including a prime lot of land in central Seoul, as part of its self-help plan.

The move comes as 4 trillion won of the airline's debt is set to mature this year.

Korean Air said it will be able to pay back the maturing debt with the creditors' financial aid and money raised through self-help measures.

Industry officials said the KDB and Exim Bank will emerge as the second-largest shareholder of Korean Air, with a 16.37 percent interest, after purchasing the carrier's perpetual bonds to be issued.