SEOUL May 28 (Yonhap) -- To this day, the Gwangju Democratization Movement of May 18, 1980, against the then-brutal military dictatorship invokes in the hearts of many South Koreans emotions of horror and deep sorrow, as well as a profound respect toward hope for democracy.

The movement, which ended with hundreds of people killed and thousands wounded, has also resulted in the creation of a vast number of artworks attempting to process the raw human emotions from the incident, which still resonates deeply to this day.

In remembering the 40th anniversary of the Gwangju civil movement, the Gwangju Biennale Foundation has launched a multiregional serial exhibition project, named "MaytoDay," beginning in Taipei earlier this month.

The second entry, titled "Spring of Democracy," is coming to Sonje Art Center and the Namu Art Gallery in northern Seoul from June 3-July 5.

Curated by Ute Meta Bauer of Germany, "Spring of Democracy" brings together some 190 items on the 1980 movement in South Korea, including journalistic documents and photos, and wood block prints, created by 26 artists from five different nations. 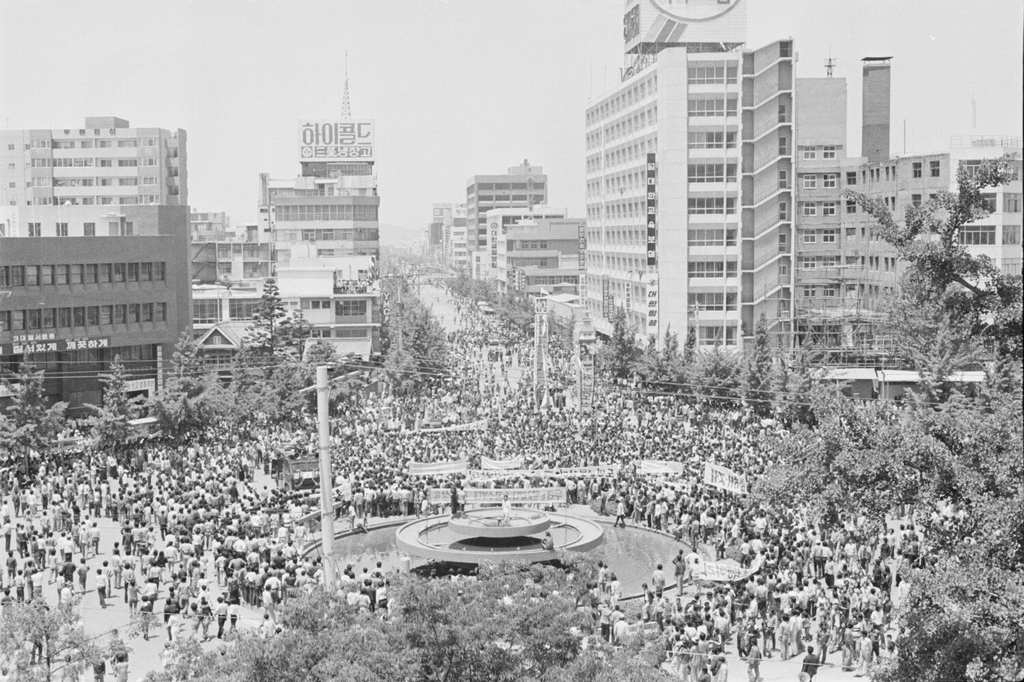 Most of the works have been presented to the public during the previous 12 editions of the Gwangju Biennale. Together with a batch of recorded documents, such as videos and photos provided by the May 18 Memorial Foundation and the 5•18 Archives, Bauer curated the catalog of works by giving context and emphasizing the constant dialogical relationship between memory and history.

"It is really interesting to see how 'Spring of Democracy' can keep our memory and connect not just to the younger generation but also for people who have been participating and have been experiencing this moment in time to share them," Bauer said at a press conference via teleconference at Sonje Art Center on Thursday.

The Sonje Art Center portion of the exhibition focuses on photography, both of art and media documentation. Upon entering the gallery, visitors are met with a large print of a photo by journalist Lee Chang-seong, provided by the May 18 Memorial Foundation, capturing a mob of citizens filling up the plaza in front of the provincial government office at Gwangju's Geumnam street.

Kwon Seung-chang's "That Place," first presented in 2010, consists of photos of a soldier in front of a Gwangju military base and a Gwangju citizen facing one another. Kwon had the two face each other to remind viewers of the standoff between the military and citizens.

Mircea Suciu of Romania has provided two drawings based on photographs taken by South Korean photojournalist Na Kyung-taek. One depicts a confrontation between paratroopers and civilians at Geumnam street on May. 20 and another is based on a photograph of Chonnam National University students confronting a group of riot police on May 15, 1980, a pivotal moment that led to the full-blown city-scale uprising. 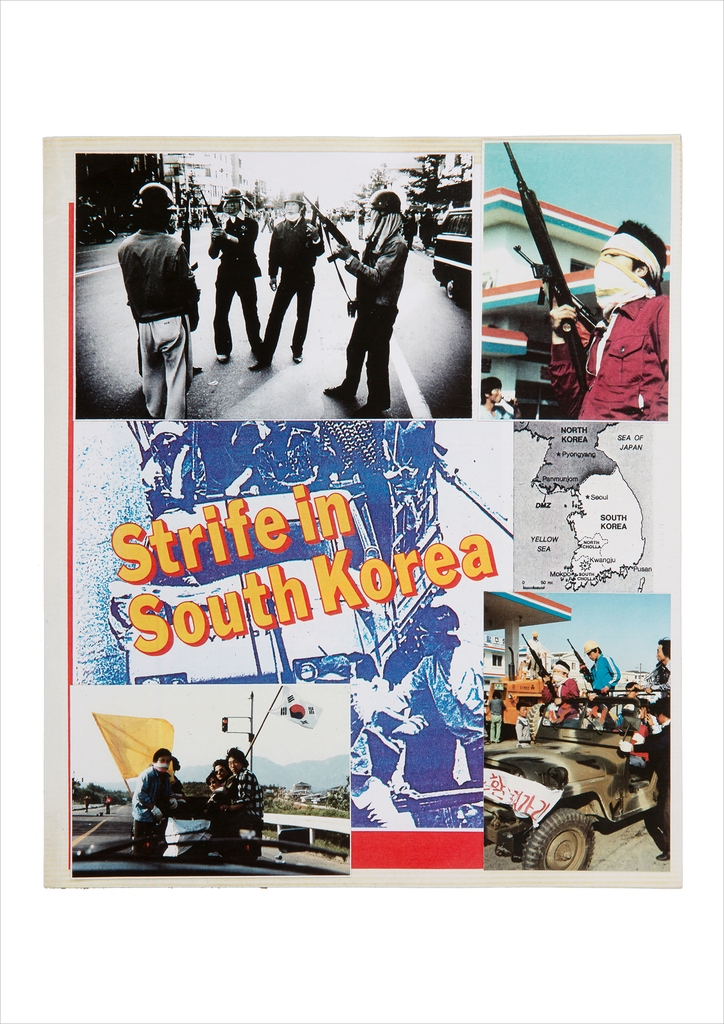 Also present at the Sonje Art Center are excerpts from the scrapbooks of late German journalist Jurgen Hinzpeter, who snuck into Gwangju to film the brutal massacre, despite an entry ban. His work played a crucial role in letting the world know what happened in Gwangju back then and was the inspiration for the 2017 South Korean hit film "A Taxi Driver."

The other half of "Spring of Democracy" will be held at the nearby Namu Art Center in Insa-dong, featuring a large number of visually arresting woodblock prints, considered one of the most significant art genres in testifying to the period of sociopolitical unrest.

Through narrative portrayals and depictions of symbolic images, the woodblock prints, according to the Gwangju Biennale foundation, functioned as one of the central visual mechanisms of revolution against state violence. 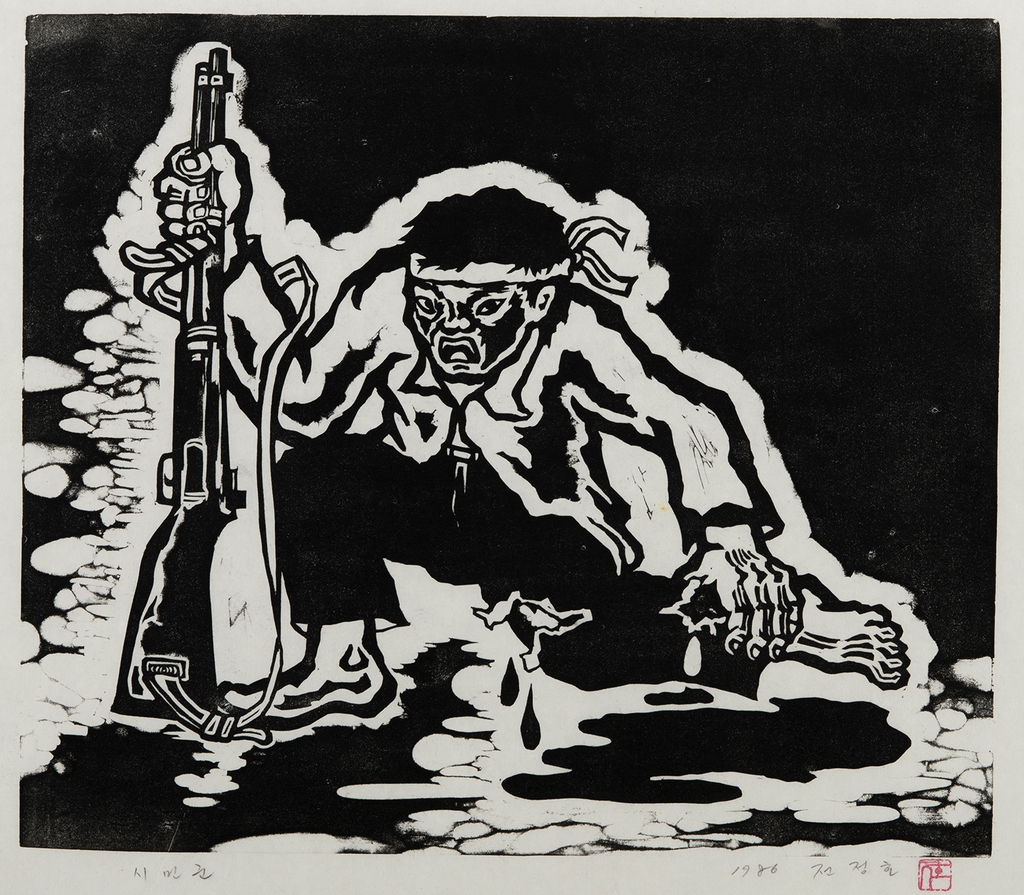 Jeon Jeong-ho's "Militia" depicts a injured man trying to get up and fight while bleeding in the leg, and Han Hee-won's simple-yet-desolate piece "Arirang" illustrates the struggles and difficulties in facing the dead at the Mangwol-dong national cemetery.

"We also looked back to the woodblock prints of the 'minjok' (national) movement, of artists who lived in Gwangju during the movement and who tried to come to terms (through art) with what happened in the city."

The Gwangju Biennale Foundation plans to hold similar exhibitions themed around the Gwangju uprising in Buenos Aires and Cologne until August. The four completed exhibitions will be restaged in Gwangju in September 2020.