SEOUL, May 29 (Yonhap) -- The number of budget smartphone users in South Korea continued to drop in March with its market share threatening to sink below the 10-percent mark, data showed Friday.

Local subscribers to so-called mobile virtual network operators (MVNOs) numbered 7.61 million as of the end of March, down 0.6 percent from the previous month, according to the data from the Ministry of Science and ICT.

MVNOs rent networks from the country's three carriers -- SK Telecom Co., KT Corp. and LG Uplus Corp. They usually provide users with rate plans cheaper than those of the major carriers as they save on network operation costs.

After peaking at 8.10 million in April last year, the number of thrift phone subscribers had been on the decline, except for June last year. 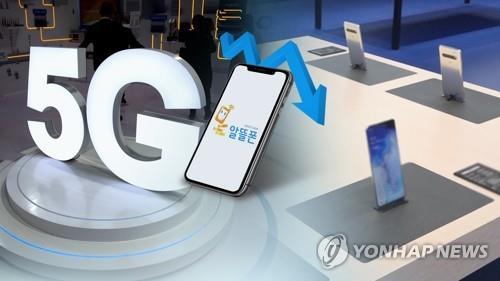 Budget handsets' share of the country's mobile phone market thus slid to 10.9 percent as of end-March. The figure sank to the 11 percent level in June last year after remaining in the 12-percent range since July 2018.

Market watchers said MVNOs would find it difficult to keep a double-digit market share down the road should the downtrend last.

The downturn was attributed to their failure to provide users with cheap 5G service rates and a lack of 5G-based budget models.

As of end-March, only 754 budget phone users subscribed to 5G services, while the three industry giants had more than 5 million.

The government has been promoting MVNO subscriptions, which were introduced in 2011, in line with its efforts to ease the burden of mobile phones fees on households.
(END)