SEOUL, May 29 (Yonhap) -- A South Korean lawmaker-elect who is a longtime activist for "comfort women" forced into wartime sexual slavery by Japanese troops on Friday denied allegations that she misappropriated donations for the surviving victims, while offering a public apology for causing a related controversy.

Speaking on the eve of the start of her four-year term at the National Assembly, Yoon Mee-hyang of the ruling Democratic Party rejected calls to give up her parliamentary seat.

"I will work (as lawmaker) in a responsible manner," she told reporters at the National Assembly. She was elected in the April 15 parliamentary elections.

In response to various suspicions, largely driven by local news reports, Yoon claimed that the donations raised by her civic group on three occasions from 1992 till 2016 have been evenly distributed to the victims.

The nongovernmental organization is now named the Korean Council for Justice and Remembrance for the Issues of Military Sexual Slavery by Japan. She had long headed the organization at the forefront of a campaign both at home and abroad to raise awareness of Japan's World War II crimes against humanity. 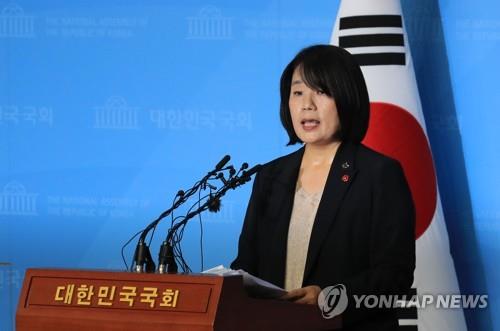 She admitted "wrongdoing" in the use of her personal bank accounts to receive some donations.

Yoon added she would come clean on all of the relevant suspicions, as she is facing a probe by state prosecutors. Last week, investigators raided the headquarters of the NGO and its facilities.

Among the allegations reported by media were her purchase of a shelter, called a "healing center," for victims in Anseong, just south of Seoul, at a price higher than market value and use of personal bank accounts in collecting financial donations during the funeral of an aged victim. Suspicions have also been raised over the financing of her own apartment purchase in 2012.

Yoon appealed to the public not to link the scandal involving her with the purity of the civic group's campaign for the dignity and rights of the victims. For three decades, it has demanded that Japan formally apologize for its wartime atrocities.

"I will thoroughly clarify (the allegations), and if there's a fault, I will take responsibility," she said. "But please stop denigrating or distorting the accomplishments the group, the victims and the public achieved together (so far)," Yoon said.