SEOUL, May 29 (Yonhap) -- The Doosan Bears defeated the Lotte Giants 4-2 on Friday to avoid losing consecutive games for the first time in the current Korea Baseball Organization (KBO) season.

Doosan starter Raul Alcantara scattered nine hits across six innings for his team-high fourth win of the season, while the team's bottom two hitters, Heo Kyoung-min and Park Kun-woo, combined to drive in three of the team's four runs at Jamsil Stadium in Seoul. 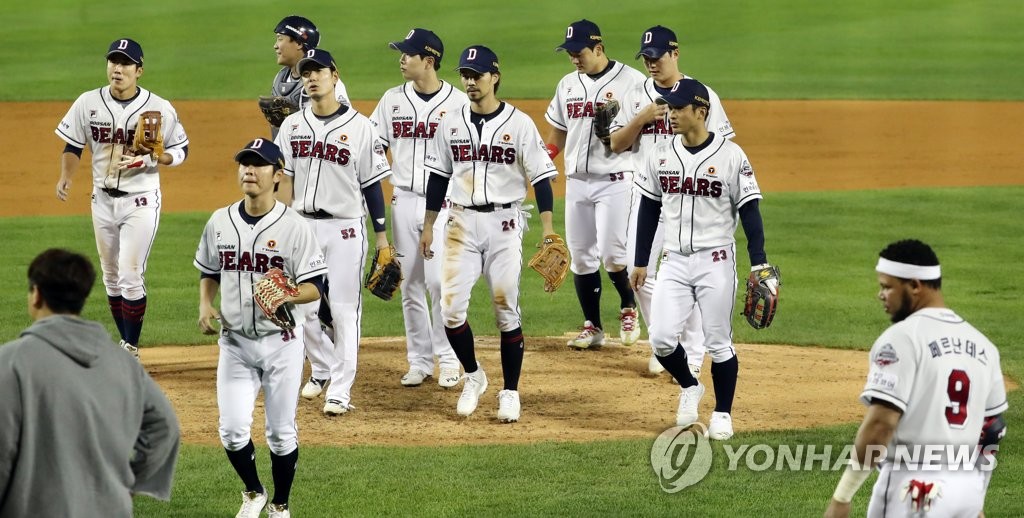 The Bears were coming off a 6-1 loss to the SK Wyverns from Thursday. They improved to 13-8 and have not yet lost back-to-back games this season.

The Bears opened the scoring with two runs in the bottom third. Heo led off the inning with a single and stole second, before coming home on Park's double.

Two batters later, Jose Miguel Fernandez cashed in Park with a single to right for a 2-0 lead.

The Giants cut the deficit in half in the top fourth thanks to Son Ah-seop's two-out, RBI single.

But the Bears regained their two-run lead in the bottom fourth, as Park hit a sacrifice fly with the bases loaded.

The Giants tried to make the game more interesting in the top sixth, with two straight singles putting men at the corners with nobody out for Dixon Machado, the team leader with 15 RBIs.

Machado picked up another RBI, though it came on a fielder's choice grounder to shortstop. The next batter, Min Byung-hun, hit into an inning-ending, 6-4-3 double play to take the wind out of the Giants' sails.

The Giants outhit the Bears 10-5 in the loss, a microcosm of their season-long inability to hit with runners aboard.

Heo said that when he was ahead in the count at 1-0 against Oh, he correctly guessed the right-hander would come back with a slider, his best pitch.

"I was sitting on that pitch and it worked in my favor," Heo said. "This is my lucky day."

Neither starter looked particularly sharp. Alcantara allowed a hit in each of his six innings and also issued three walks, but the Giants failed to capitalize on their chances.

After Alcantara, three Doosan relievers gave up just one hit over three shutout innings, with left-hander Ham Deok-ju recording his fourth save.

Doosan manager Kim Tae-hyoung said Alcantara more than did his job by holding his ground despite traffic on the base paths, and he was encouraged by the strong performance of his much-maligned bullpen.