The country logged 39 additional COVID-19 cases, including 27 local cases, bringing the total caseload to 11,441, according to the Korea Centers for Disease Control and Prevention (KCDC).

The latest tally was down from the nearly two-month high of 79 on Thursday. But the authorities remained on high alert amid concerns recent bouts of infections could hamper efforts to return to normal after months of the grueling fight against the pandemic that has disrupted daily life and dented economic growth.

The slowdown appears to be attributable to the health and quarantine officials' aggressive campaign to stop the spread of infections from a distribution center of e-commerce leader Coupang in Bucheon.

As of noon Friday, 102 virus cases were linked to the Coupang center, with the first infection there confirmed last week, the KCDC has said, urging citizens to avoid large crowds and outdoor activities over the weekend.

Alarmed by the spike in virus cases, health authorities opted to impose a tighter social distancing campaign in the densely populated metropolitan area -- Seoul and the surrounding areas -- over the next two weeks through June 14. 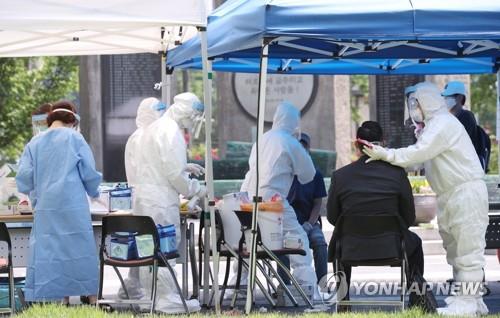