SEOUL, May 30 (Yonhap) -- North Korea's state broadcaster on Saturday reported on the death of George Floyd, an unarmed African American man who died while being restrained by police.

In its regular news program aired at 8 p.m., the North's Korean Central Television said that "a murder of a black person by a white police officer occurred on May 25 in Minneapolis, Minnesota."

The state broadcaster showed a video explaining the case and said that "actions of complaint condemning the police's racist action against black people" have broken out there.

"The Minnesota governor has declared a state of emergency as the spirit of resistance became stronger," it added.

Protests have exploded across the United States as people have gathered to grieve the killing of the 46-year-old who died after being pinned down by a white police officer. 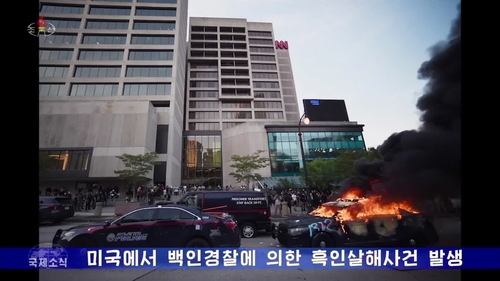