SEOUL, May 31 (Yonhap) -- South Korea's National Assembly has begun its four-year term with the highest number of female lawmakers, including the country's first-ever female vice speaker of the unicameral legislature.

Among the 300 representatives, who started their four-year term Saturday, 57 members, or 19 percent, are women, marking the largest number in South Korean history, according to data released by the National Assembly secretariat.

The data showed that there are 151 new members in total across both the ruling and opposition sides in the 21st National Assembly, accounting for 50.3 percent, up from 44 percent of backbenchers in the 20th parliament.

Rep. Park Byeong-seug of the ruling DP, who began his sixth term, is the longest serving lawmaker among all ruling and opposition lawmakers and will take the speaker position.

The youngest lawmaker was Rep. Ryu Ho-jeong of the minor opposition Justice Party, who is 27 years old, while the oldest is 73-year old Rep. Kim Jin-pyo of the ruling DP.

The National Assembly kicked off its new term Saturday, with the ruling DP holding a majority 177 seats and the main opposition United Future Party (UFP) taking 103. 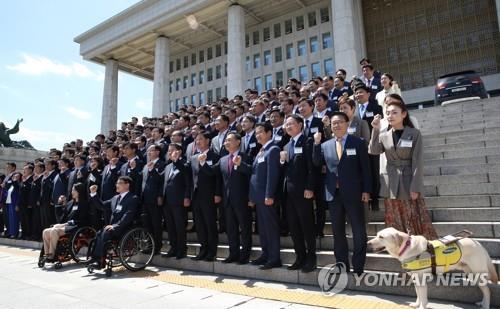