The Global Samsung Aptitude Test (GSAT), an entrance exam for those who seek jobs at Samsung, was conducted online for the first time this weekend.

"With the result of the first online exam, we will upgrade our hiring system and plan to utilize online-related solutions in various recruiting areas," the group said. 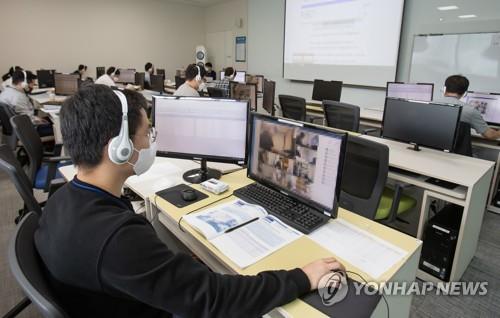 Under the new system, job applicants were asked to take the test at home using their personal computers. They were required to record a video using their smartphones to show a monitor screen, a mouse and their face and hands so that an exam proctor could monitor possible cheating practices in real time.

Samsung said those who are caught cheating will be banned from taking its test for five years. So far, no cheating or program malfunctions have been reported, the group said.

Samsung didn't reveal how many people took the online exam, but industry sources said the figure may be smaller than a year ago.

However, Samsung positively evaluated its first online GSAT, saying it contributed to the country's fight against the novel coronavirus.

"The online exam is a suitable recruitment system in the era of the Fourth Industrial Revolution, and it is a path that we should move toward someday," the group said. "It also contributed to reducing various social costs compared with a massive offline test."