SEOUL, June 1 (Yonhap) -- South Korea's major travel agencies are expected to see their second-quarter sales tumble due to the fallout of the novel coronavirus outbreak, a market tracker said Monday.

Local brokerage houses have projected industry leader HanaTour will register sales of 50.1 billion won (US$40.7 million) for the April-June period, down a whopping 74.1 percent from a year earlier.

HanaTour is thus forecast to chalk off an operating loss of 27.5 billion won for the three-month period, compared with a 3.6 billion won operating income a year ago. 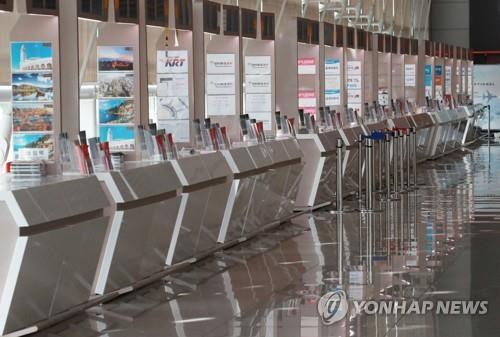 Lotte Tour Development and other tour agencies are also feared to see their second-quarter sales and profits worsen sharply from the same period a year earlier.

Local tour operators have been hit hard by the global spread of COVID-19, which has resulted in a tumble in travel demand following lockdowns in the United States and major European countries. More than 140 countries have imposed entry bans on South Koreans.

With overseas travel almost impossible, the government has joined hands with travel agencies to boost domestic tourism in a bid to help them tide over the crisis.

Travel agencies, in turn, are struggling to overcome the coronavirus fallout with furloughs and other cost-cutting measures.

The coronavirus pandemic has also dealt a harsh blow to local duty-free shops due to a tumble in customers. In their latest countermeasures, industry leader Lotte Duty Free and No. 2 Shilla Duty Free on Monday shuttered their outlets on the southern resort island of Jeju, a popular destination for Chinese travelers, for one month.
(END)