SEOUL, June 1 (Yonhap) -- The government and the ruling party agreed Monday to earmark "the biggest single supplementary budget" for the country's third round of emergency COVID-19 response financing, aimed at helping the economy fight the impact of the new coronavirus pandemic.

The government and the Democratic Party (DP), during their meeting, also vowed to pass a bill on the new COVID-19 response budget through the National Assembly in June and execute 75 percent of the budget in the next three months.

"It will be the biggest single supplementary budget (bill) in history, which takes all into account, bolstering (the country's) financial capability, boosting the economy in the latter half of the year and expanding the social security net," according to the finance minister.

"The government will make preparations in a way that 75 percent of the new extra budget can be spent in the following three months upon its parliamentary passage," he also said.

The upcoming extra budget is widely reported to surpass the 30 trillion-won level.

Kim also vowed efforts for the parliamentary approval of the bill in June on behalf of his party, which controls a majority of 177 seats in the 300-member chamber.

According to the DP, the extra budget will partly cover a government plan for an emergency credit line worth 10 trillion won for small business owners, as well as the establishment of funds worth 30.7 trillion won for stabilizing the bond and stock markets.

Also included is the government's financing of corporate bond purchases worth around 20 trillion won, aimed at helping relieve liquidity crunches at companies.

The government also plans to create around 550,000 emergency jobs in the digital sector and to install some 41,000 free public Wi-Fi spots across the nation by 2022 through the new extra emergency financing.

To help prop up the local economies, the government will also issue 5 trillion won worth of vouchers that can be used at local stores and businesses and put them up for sale at a 10 percent discount, according to the ruling party

In a briefing to the press, Rep. Cho Jung-sik, the head of the DP's policy committee, said, "The extra budget will be partly sourced by restructuring the country's expenditures (of tax revenue), and the rest of it will be financed by national debts."

Later in the day, President Moon Jae-in will convene an emergency economic policy meeting to discuss the new supplementary budget, as well as the economic policy direction for the second half of 2020. 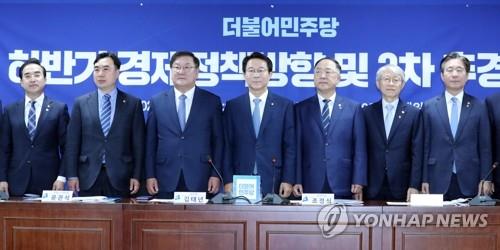