SEOUL, June 1 (Yonhap) -- South Korea on Monday marked the 30th anniversary of the establishment of its first independent submarine unit, celebrating the record of no accidents involving submarines or midget subs since even before the unit's establishment.

On June 1, 1990, the Navy launched the 57th Submarine Flotilla in a move to bolster its underwater capabilities and combat readiness, which served as a basis for the Navy Submarine Force Command established in February 2015.

Holding a ceremony at the command compound in South Gyeongsang Province, the Navy also celebrated the record of its submarines and submergence vehicles navigating 2.8 million miles, or 4.5 million kilometers, so far without an accident. It is tantamount to a distance that circles the Earth 129 times.

South Korea began operating its first submergence vehicle in 1984 and introduced a submarine -- a 1,200 ton-class Changbogo submarine -- for the first time in 1992 from Germany, according to the Navy.

Currently, the country possesses 18 submarines, including eight 1,200-ton and another eight 1,800-ton midget ones. The Navy is expected to secure 3,000-ton subs within the next few years.

"We prioritize safety when carrying out missions," the Navy said in a release, adding that its know-how has been shared with many foreign countries.

The Navy launched an education and training program for international officers in 2013, and 76 people from 10 countries, including the United Arab Emirates, Singapore and Turkey, have completed the program, it added.

North Korea is believed to have 70 subs, most of which were known to be outdated and unfit for operations beyond coastal waters. It has been working to build a new submarine believed to be a 3,000-ton one and capable of carrying ballistic missiles. 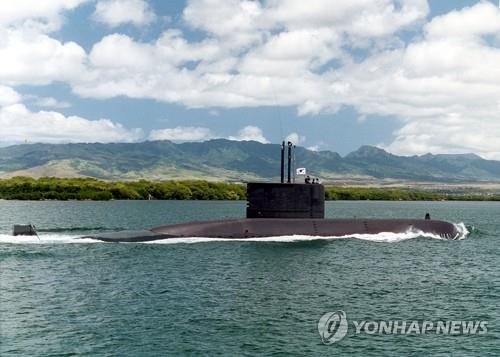