SEOUL, June 1 (Yonhap) -- The defense ministry said Monday it has opened websites to receive complaints from potential victims among military personnel about controversial humidifier disinfectants blamed for a number of deaths.

Earlier, the defense ministry confirmed that 15 military units across the country used the controversial products for years until 2011, and it opened a support center in September last year to find and support potential victims.

"Today, we also opened internet and intranet websites exclusively for the issue to receive reports from victims and to provide them with counseling services online," the ministry said in a release.

So far, a total of 136 people have reported their suffering to the defense ministry through the offline center, it added.

Government tests found that toxic biocides were used in the products made by several companies, including Oxy Reckitt Benckiser and SK Chemicals. Such products first hit the shelves here in 1994 and were sold until being banned in 2011.

Investigations into the firms have resulted in a number of convictions. Last year, Seoul's top court upheld a lower court's six-year sentence on Shin Hyun-woo, Oxy's former chief, for accidental homicide due to professional negligence in sales of the deadly cleaners.

More than 6,700 people have registered themselves as victims, and family members claim that 1,550 deaths are linked to humidifier disinfectants. 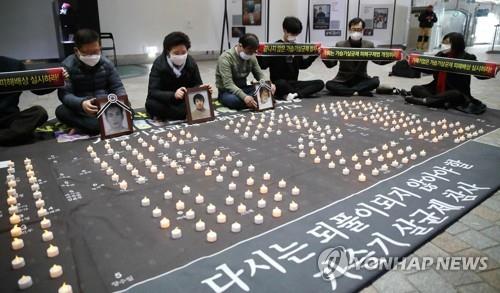