The mobile version of the mega-hit game "Lineage 2" was the most popular app in the world on Android platforms during the January-March period, partly on the back of the novel coronavirus pandemic that has confined people to their homes, the data from analytics firm App Annie showed.

"Mobile games served not only as an entertainment tool but as a way of social connection as going outside was largely forbidden globally due to intensive social distancing following the COVID-19 outbreak," the firm said. 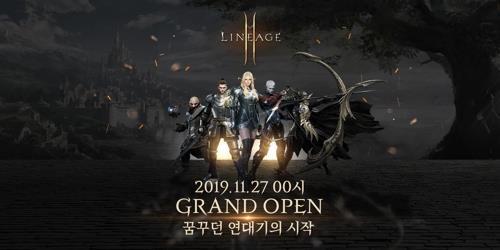 Separate data from Nielsen showed that the average time spent gaming in the United States, France and the United Kingdom increased 45 percent, 38 percent and 29 percent, respectively, during the COVID-19 outbreak.

The mobile game is a follow-up to the online MMORPG "Lineage II," which was launched in 2003. Other mobile entries in the series are NCSOFT's Lineage M and Netmarble Corp.'s Lineage 2 Revolution.