SEOUL, June 1 (Yonhap) -- South Korean stocks closed sharply higher Monday on hopes of a quick economic recovery prompted by a government push for a third supplementary budget and eased concerns over tensions between the United States and China. The Korean won sharply rose against the U.S. dollar. 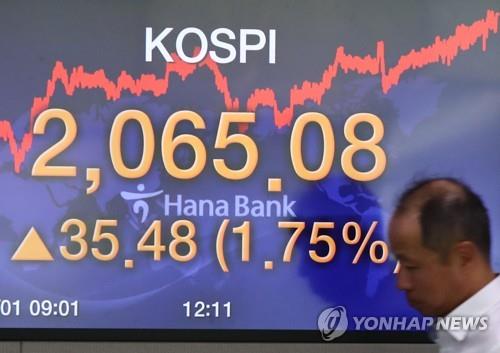 South Korean President Moon Jae-in confirmed the government's push for this year's third supplementary budget, which he said must be the largest in the country's history, prompting hopes for a quick recovery of the economy hit by the COVID-19 pandemic.

A third supplementary budget, if realized, will mark the first of its kind in over five decades since 1969. The president said the government bill on the proposed budget will be submitted to the parliament before the end of this week.

The stock index started off strong with improved investor sentiment, helped by the milder-than-expected U.S.-China political friction over Beijing's passage of a new national security law that may severely undermine civil liberties of Hong Kong citizens.

The set of countermeasures announced by U.S. President Donald Trump came with harsh rhetoric but lacked specifics, leaving room for a possible de-escalation of tensions in the future.

"Mr. Trump has had many difficulties from the new coronavirus, and seems to be averting that pressure by maintaining the U.S.-China tension to a certain degree that does not harm his home economy," Park said.

Bond prices, which move inversely to yields, closed lower. The yield on three-year Treasurys gained 0.5 basis point to 0.831 percent, and the return on the benchmark five-year government bond added 2.2 basis points to 1.119 percent.