SEOUL, June 1 (Yonhap) -- The defense ministry said Monday it will bring home about 120 sets of remains of South Korean soldiers killed during the 1950-53 Korean War from Hawaii this month as part of projects to mark the 70th anniversary of the conflict.

The remains have been kept by the U.S. Defense POW/MIA Accounting Agency (DPAA) after being recovered in joint excavations between the United States and North Korea from 1996-2005 or handed over by the North to the U.S. following the first summit between U.S. President Donald Trump and North Korean leader Kim Jong-un in Singapore in June 2018.

The remains were identified as those of South Koreans through forensic testing, officials said.

Their repatriation is scheduled to take place between June 19 and June 25, with the ministry looking to mobilize the country's KC-330 aerial tanker, they added.

It is one of 15 projects that the Seoul government is pushing for throughout the year to commemorate the 70th year of the outbreak of the war, where South Korean, American and other international soldiers fought to repel invading Chinese and North Korean forces.

To express gratitude for their sacrifice, the ministry plans to hold a variety of commemorative events for veterans and their members.

"We are reviewing holding events in four nations between October and December. We will seek other ways, such as delivering gifts and thank-you notes, if such visits are not possible (due to the coronavirus)," a ministry official said.

The government will also mark the victory of three key battles -- the Battle of Incheon, the Nakdong River battle and the Battle of Chuncheon -- by holding ceremonies and establishing centers to allow visitors to experience the historic moments by maximizing the latest technologies.

Cultural and academic events, such as exhibitions and an international forum, are also planned to raise public awareness about the tragic incidents and national security and to promote the country's achievements over the past decades, according to the ministry.

The military musical "Return: The Promise of the Day" is set to be staged around June 16, drawing keen attention, as it is to involve a group of high-profile K-pop stars, including members of popular boy bands EXO and Wanna One, the ministry said.

"We will push for the projects while fully complying with the government's quarantine and safety measures against the COVID-19 virus," the ministry said in a release. "We will strive to present diverse events to give the people a deep impression."

Veterans of the 1950-53 Korean War from U.N. allied nations place flowers in front of a cenotaph for their fallen comrades during a visit to the War Memorial of Korea in Seoul's Yongsan Ward on Nov. 12, 2019. (Yonhap) 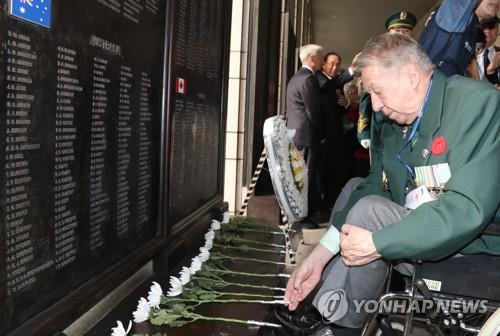 Remains of S. Koreans killed in Korean War to return home from Hawaii this month

Remains of S. Koreans killed in Korean War to return home from Hawaii this month