According to Counterpoint Research, the domestic mobile phone market, which was expected to post solid growth with the launch of new 5G handsets, took a hit as the public health crisis caused people to move about less and sapped consumer demand for new gadgets.

It said, compared with the same three month period in 2019, sales of smartphones were down 10 percent.

By manufacturer, Samsung Electronics Co., a global leader in smart devices, secured 68 percent of the market from January through March. That represents a gain from 54 percent tallied for the fourth quarter, and up from 66 percent for the first quarter of 2019.

Apple Inc. came in second with a market share of 16 percent, with LG Electronics Inc. coming in third place at 15 percent.

Besides the overall drop in sales, Counterpoint said that consumers are clearly showing interest in budget devices that cost under US$250. It said while phones costing more than $600 made up 54 percent of the local market, budget offerings accounted for 37 in the first quarter, up from 27 percent a year earlier.

"There seems to be a move towards cheaper phones with decent performance, along with rise in online purchasing," the research monitor said.

It said in South Korea, where online purchases made up just 9 percent of all mobiles phones bought, this rose to 13 percent in the first quarter with the development being linked to people limiting outside contact due to the COVID-19 pandemic. 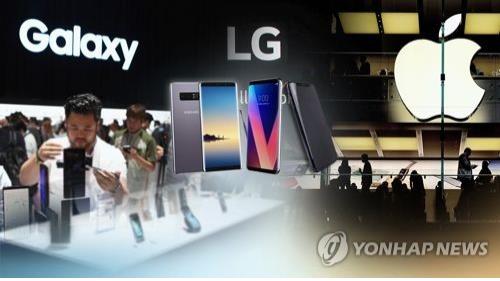