"It will surpass the previous record of 28.4 trillion won, which demonstrates the willingness by the finance authorities (to tackle the financial woes brought by the novel coronavirus pandemic)" he said.

For the two previous supplementary budgets, the government secured over 20 trillion won.

As part of a broader effort to address the financial troubles for the less privileged, the government also plans to prepare a roadmap for a universal employment insurance system by the end of the year, as it recognizes the need to reinforce the insurance scheme to enable all economically active people to file unemployment claims when they lose their jobs.

"The current labor insurance system is built around business owners, so there is a need to redesign the system," through which the government can figure out the exact economic situation of, for example, small business owners, he said.

On the state emergency relief fund, he stressed that the government had no plan to roll out another round of payments to all people. He added, however, the government will continue offering assistance to those in need through economic policies.

The government began offering relief funds totaling 14.3 trillion won to all households. Of the total, some 12.68 trillion won has been distributed so far.

Earlier in the day, the government slashed its growth outlook for the year to 0.1 percent from the 2.4 percent forecast late last year.

While conceding there was a possibility of contraction this year due to economic strains by COVID-19, the better-than-expected outlook was made based on "a supplementary budget, prospective effects of the government's economic policy for the second half, and the government's will (to overcome any difficulties)." 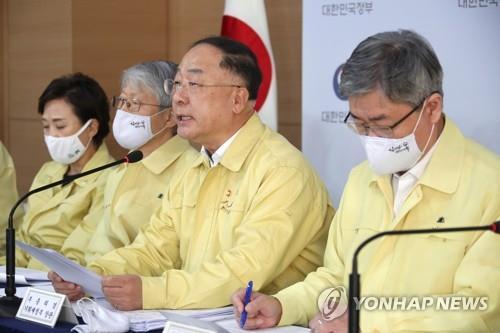