WASHINGTON, June 1 (Yonhap) -- With U.S. President Donald Trump's invitation to a Group of Seven summit in the fall, South Korea finds itself in a tough diplomatic position between its ally the United States and its strategic partner China, according to analysts.

The White House has made clear that an expanded meeting would bring together traditional U.S. allies to talk about the future of China as tensions between Washington and Beijing have soared over the coronavirus pandemic and civil liberties in Hong Kong.

President Moon Jae-in was quick to accept Trump's offer during a phone call between the leaders Monday, saying his country will do its part in quarantine and economic recovery efforts.

But given that the United States will likely use an expanded G-7 to add pressure on China, South Korea may need to weigh its benefits against its risks, according to analysts. 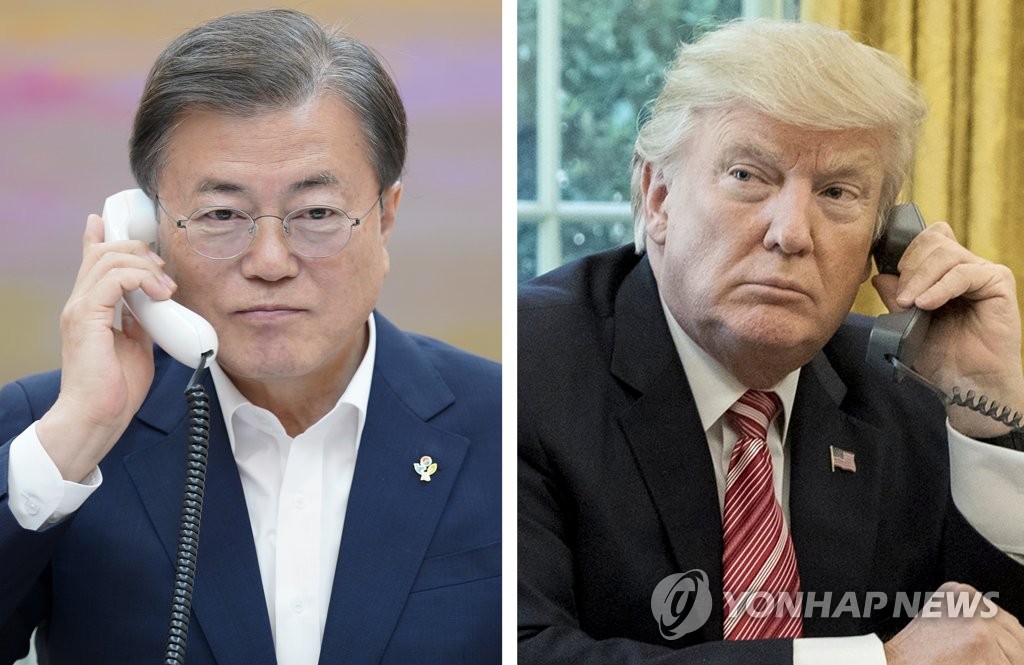 "South Korea, in many respects, is in a nearly impossible position when it comes to the budding Cold War between China and the United States," Harry Kazianis, senior director for Korean studies at the Center for the National Interest, told Yonhap News Agency.

"President Moon needs a strong trade relationship with China and their help with North Korea. At the same time, he needs to make sure Washington continues to see the U.S.-South Korea alliance as critical to its long-term Asia strategy," he said.

The goal for the Moon government is not to become too wedded to one side but to somehow appear at least neutral in what could be a multi-decade standoff, Kazianis added.

Scott Snyder, senior fellow for Korea Studies at the Council on Foreign Relations, was careful to not jump the gun, noting that other G-7 members may feel differently about the countries Trump wants to add, including Australia, India and Russia.

"I think it is still too early to say how the situation will play out," he told Yonhap. "It is a feather in South Korea's cap to be discussed as a possible member of an expanded dialogue larger than the G-7 but smaller than the G-20. But there are many questions that remain to be resolved before it will be necessary for South Korea to decide whether or not to join, including how other G-7 members feel about the invitation list and how China is likely to respond."

U.S. Secretary of State Mike Pompeo, who has been on the front line of the U.S. campaign against China, has singled out South Korea among the countries Washington expects to be on board with its policies.

"We can be good partners alongside them and ensure that the next century remains a Western one modeled on the freedoms that we have here in the United States," he told Fox News on Sunday.

But Moon Chung-in, a special security adviser to President Moon, recently summarized the dilemma Seoul faces in its diplomatic relations with the superpowers.

"South Korea is an American ally, and we maintain a strategic cooperative partnership with China," he said last week during a virtual seminar hosted by the Quincy Institute and the Seoul-based East Asia Foundation. "And obviously, alliance is more important than strategic partner. Therefore, for us, our number one priority (is) under the U.S., but ... we are structurally dependent on China."

The expert said China accounts for 24 percent of South Korea's external trade, compared with 9 percent with the U.S. and 7 percent with Japan.

"If we antagonize China," he said, "China can pose a military threat to us. Plus, China can support North Korea. Then, we will really have a new Cold War on the Korean Peninsula and in Northeast Asia."

He also noted that cooperation between Washington and Beijing is critical to solving global problems, such as the coronavirus pandemic and issues of nonproliferation and climate change.

"Therefore, our hope is this: We want to maintain good relations with both countries," he said. "We are really hoping the United States and China work together."