SEOUL, June 2 (Yonhap) -- More than 40 South Korean companies have struck deals worth 71.6 billion won (US$58 million) with Japanese firms for the export of dried laver, the fisheries ministry said Tuesday.

The deals were reached in a videoconference hosted by the Korea Fishery Trade Association and five Japanese civilian organizations on Thursday, according to the Ministry of Oceans and Fisheries.

The amount is up 20.9 percent from a year earlier and accounts for nearly 88 percent of total exports by 46 South Korean firms that participated in the annual bidding and consultation meeting.

In terms of volume, the deals represent a 25.1 percent increase from the previous year.

Dried laver, called "gim" in Korean, is usually roasted with sesame oil and fine salt and served as a side dish with Korean meals. Snacks made of gim have gained popularity among foreigners in recent years.

Japan is a major destination for South Korean dried laver. The association had held face-to-face meetings in Tokyo in the past, but it decided to have a videoconference this year due to the coronavirus pandemic.

The deals come amid frayed bilateral relations. Japan remains mum on South Korea's repeated calls to swiftly lift restrictions on exports of three key industrial materials, which were imposed in July last year in a row over wartime forced labor. 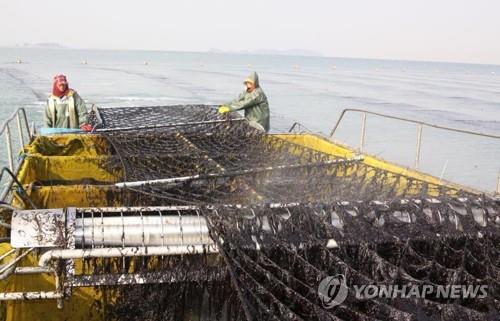