SEOUL, June 2 (Yonhap) -- For his summit diplomacy, South Korean President Moon Jae-in, like many of his foreign counterparts, has relied on phone or video links since the outbreak of the new coronavirus.

Talk of Moon resuming his formal overseas trips is back with U.S. President Donald Trump's invitation to an expanded Group of 7 (G7) session that he hopes to host as early as September.

Moon agreed to join the session, if organized, but the feasibility of Trump setting it up remains doubtful with no end to the COVID-19 pandemic in sight. Experts warn about the possibility that a second wave of the pandemic will hit the globe within this year.

Moon made his latest overseas visit during last year's Christmas season. He met bilaterally with Chinese President Xi Jinping in Beijing and then had an annual trilateral summit with Japanese Prime Minister Shinzo Abe and Chinese Premier Li Keqiang in the mainland city of Chengdu.

Moon began this year with plans for a series of overseas trips. He was supposed to travel to the United Arab Emirates (UAE), Egypt and Turkey in mid-March. But he canceled the tour due to the spread of the coronavirus.

At that time, a Cheong Wa Dae official said the virus would be brought under control in May or June and then the president would immediately seek to visit the three nations.

Speaking on the condition of anonymity, he cited the strategic importance of the countries either over defense industry partnerships or geographical value as a potential advance base for Seoul's efforts to reach out to Africa. 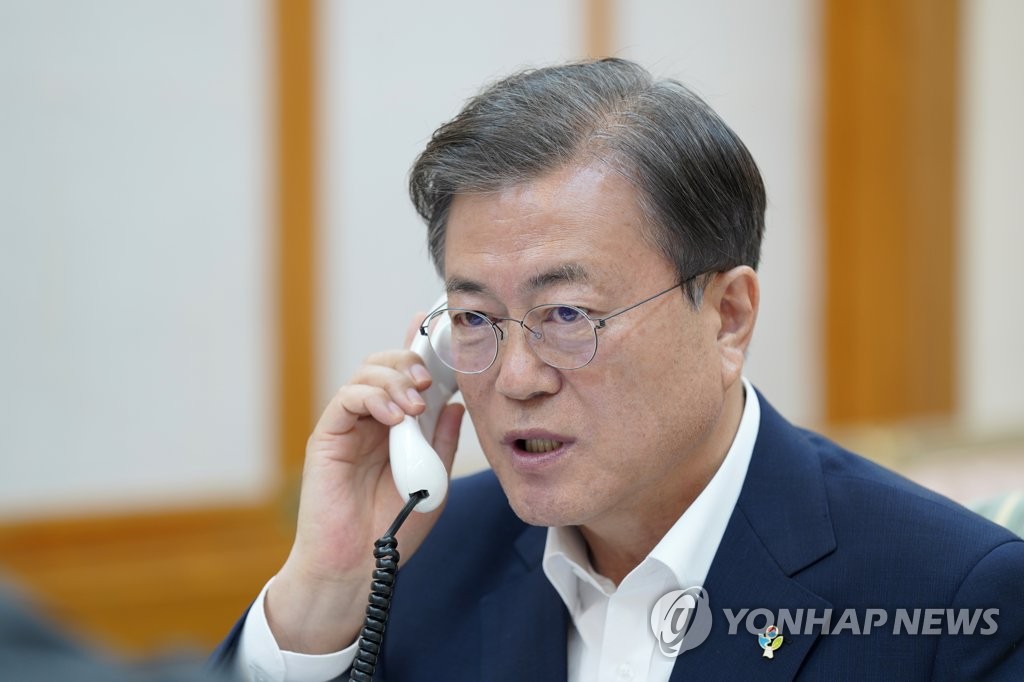 Moon's regional trip, however, has not become a reality yet amid the drawn-out virus crisis.

Asked recently about whether Moon is considering attending Russia's Victory Day military parade, slated for June 24, another Cheong Wa Dae official told reporters that, "It's not a time yet for the president to plan any overseas visit."

In contrast, Moon was quick to accept Trump's invitation, expressing support for his bid to broaden the membership of what he calls the outdated G7 forum to include South Korea, Australia, India, Russia and probably Brazil as well.

Trump, host of this year's G7 summit, apparently prefers commemorative group photos and handshakes in front of TV cameras to a virtual gathering.

He had pushed for a meeting at the Camp David presidential retreat in Maryland this month. As German Chancellor Angela Merkel rejected the offer on virus concerns, Trump announced that he would postpone it until around the United Nations General Assembly in September or later.

Whether Trump will be able to host a live summit depends largely on pandemic situations and potentially the outcome of the Nov. 3 presidential election. It's also traditionally difficult to assemble major global leaders.

Should it take place in the coming months as Trump seeks, Moon agreed, it would send a message that the world is returning to normal life.

Trump's suggestion for the embrace of South Korea and some other "like-minded" nations as new members of the G7 came amid sharp conflict between Beijing and Washington. Observers view it as aimed at weakening the influence of China, as well as that of members Germany and France, which have often been uncooperative in the eyes of Trump.

It appears to be in line with the Trump administration's Indo-Pacific strategy and Economic Prosperity Network (EPN) initiative reportedly meant to sideline China from global supply chains.

Agreeing to participate in the envisioned G7 session, Moon might have been somewhat less burdened, though, as the Chinese president plans to visit South Korea at an "early and appropriate" time before the end of 2020.

A meeting here with Xi may be Moon's season opener for his face-to-face summit diplomacy.