SEOUL, June 3 (Yonhap) -- Most humanitarian programs in North Korea have come to a halt as border closures and other stringent global antivirus measures have made it hard to procure and ship necessary aid materials to the communist state, a Red Cross official has said.

Thierry Ribaux, who headed the Pyongyang office of the International Committee of the Red Cross (ICRC) until early February, also said that the organization has no choice but to keep its operations at a "minimal" level as it has become almost impossible to get not just materials but also its staff into the country.

Ribaux left Pyongyang as North Korea was taking a set of drastic antivirus measures in late January to fend off COVID-19 and he has since been closely monitoring humanitarian activities in Pyongyang as deputy chief of the ICRC's mission in Beijing in charge of regional coordination.

"Preventive measures taken by states in relation with the COVID-19 pandemic have impacted substantially the implementation of humanitarian activities in the DPRK," he said in a written interview with Yonhap News Agency. DPRK is the acronym of the North's official name, the Democratic People's Republic of Korea.

"It notably led to the impossibility to ensure the rotation of international staff and to ensure regular procurement and shipment of material. Consequently, the ICRC had to suspend temporarily most of the programs," he added. 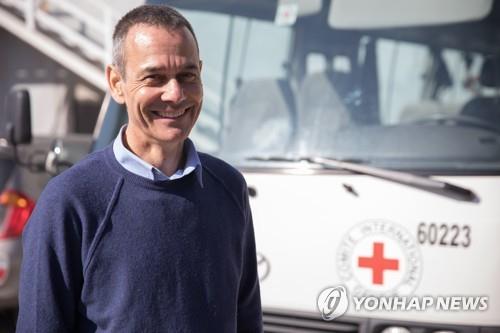 Since the coronavirus outbreak began in the Chinese city of Wuhan late last year, North Korea has taken relatively swift and drastic antivirus measures by shutting down its border and toughening quarantine criteria, rendering it harder for people and goods to move in and out of the country.

Pyongyang has claimed to have no coronavirus infections, but skepticism persists that it might be covering up an outbreak that could have already spread across the country given its susceptibility to such highly contagious diseases amid insufficient medical infrastructure.

Some embassies in Pyongyang have reportedly been temporarily closed, with diplomats and assistance workers returning to their home countries in a precautionary move.

The Geneva-based ICRC is known for its global humanitarian commitment to war victims and rehabilitation, and it has operated its office in Pyongyang since 2002 and usually maintains six of its own workers, along with some 20 North Korean staff, to coordinate with local authorities.

Ribaux said that four of its own workers were sent home in March and that it was not part of an evacuation but rather "regular staff rotations." But their replacements, not to mention his own, haven't been able to be brought into the North, forcing the organization to barely maintain "some minimal activities."

"The ICRC has included four foreign nationals in the list, and they were all taken in the flight in March and have reached their home destinations in the next weeks. It is not an evacuation, but it fits into regular staff rotations," he said.

"We have two international staff currently working in our mission in Pyongyang ensuring some minimal activities are continued," he added. "(But) ensuring that we still keep the capacity to resume activities, together with our partner the DPRK RCS (Red Cross Society), as soon as the situation will allow has proved challenging."

Asked about an assessment on North Korea's antivirus response, Ribaux declined to elaborate, apparently due to the political neutrality principle that the ICRC strictly maintains in host countries, but he noted that the North's Red Cross has "contributed to" such efforts with the support of the International Federation of the Red Cross and Red Crescent (IFRC).

Ribaux called his time in North Korea an "intense year" during which he was able to have first-hand experience of various humanitarian projects in the reclusive state in close coordination with North Korean authorities.

He, in particular, cited a multi-year "emergency room project" launched in early 2019 at the Pyongyang Medical College Hospital as one of the most memorable things he did in the North, though it also recently came to a halt due to the coronavirus pandemic.

The objective of the project is to improve emergency health care by creating a "functional prototype" by which to treat patients with serious or life-threatening needs with the right expertise and resources.

The need for such services must have grown in the wake of the coronavirus pandemic. North Korean leader Kim Jong-un has also shown a keen interest in a large-scale hospital construction project by attending its groundbreaking ceremony in March.

"I am particularly glad that we managed, within only a few months (since my arrival in North Korea), to put the ambitious emergency room project well on track. It required a collective effort by the DPRK RCS, the Ministry of Public Health and the ICRC," Ribaux said.

"Quickly, a common understanding of the aim of the project emerged, and that created a very conducive environment. I do hope that the project will resume on the same track once activities can restart," he added.