SEOUL, June 2 (Yonhap) -- South Korea is geared up for its third phase of school reopening Wednesday, but parents and educators alike still have a low level of confidence for a return to school.

Since May 20, the government has run the phased school reopening program, first with 440,000 high school seniors and second with 2.37 million students in other year groups, including kindergartners.

By Wednesday, 4.59 million, about 77 percent of the total South Korean school kids, will be attending in-person classes.

They believe staying at home and learning through virtual classes are just not enough for the mental and intellectual development of young Koreans. 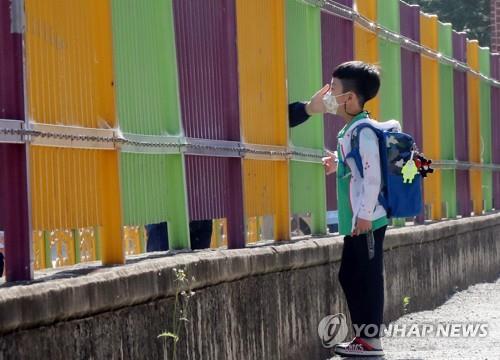 But infection cases have been consistently reported at schools, cram schools and business establishments frequently visited by students.

On Friday, a high school senior in the southern port city of Busan tested positive for COVID-19. Two days later, a second-year elementary school student in Anyang, a suburb of Seoul, was confirmed to have the virus. In both cases, the schools they attend and others in the area were closed to curb the potential spread of the virus.

The Education Ministry said 534 schools nationwide suspended their reopening on Tuesday to limit the spread of the virus. What is concerning is 531, or 99 percent of them, are located in the capital area.

Bucheon, which is located between Incheon and Seoul, closed the largest number of schools at 251, followed by 242 in Incheon. Seoul saw 27 schools closed.

Bucheon recently reported a cluster of 117 infections connected to a logistics center there.

The city and two wards -- Bupyeong and Gyeyang -- of Incheon decided to postpone the reopening of schools until June 10, except for classes for high school seniors.

The operation of cram schools -- which have mostly stayed open despite the government's warning against it -- is particularly worrisome.

According to the ministry, a total of seven confirmed cases involving students were reported from cram schools from February to May. But the figure rose to 20 in May. Since February, more than 30 cases involving teachers or officials at cram schools have been reported.

To address the concerns, the government is inspecting the safety conditions of private education institutes in the capital area on Monday and Tuesday. 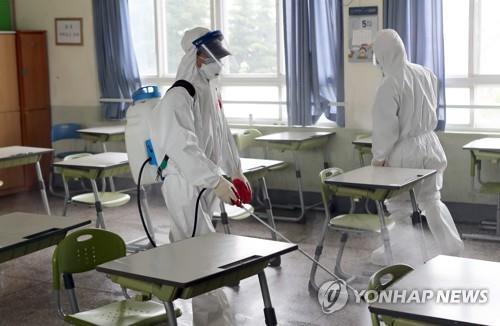 But the education ministry maintains its position that the coronavirus is under control, with the government's stringent quarantine protocols and testing and tracing capability.

Last week, it toughened measures to minimize classrooms crowding in Seoul and the surrounding area.

It also strongly advised businesses frequented by teenagers to remain closed until June 14.
If they choose to remain open, they have to make sure that patrons write entry logs, wear masks and maintain at least a 1-meter distance from one another.

But some parents remain apprehensive.

Ju Eun-hwa, a working mother with three kids, said she wanted the country to switch back to strict social distancing guidelines and postpone the reopening of school to the second half.

Earlier last month, the government eased the guidelines in an attempt to resume normal life and prop up the ailing economy.

"It is really frustrating to see the infection number going up again after hitting nearly zero at one point. I want the government to implement stricter social distancing rules again," she said.

Her twins, second-year middle schoolers, and her youngest son, a third-year elementary school pupil, are set to go to school Wednesday.

They have been on their own at home for the last three months as both parents are working.

She said, "The best option, I think, is to run online classes for the time being. Safety at school, not to mention in cram schools, is not guaranteed." 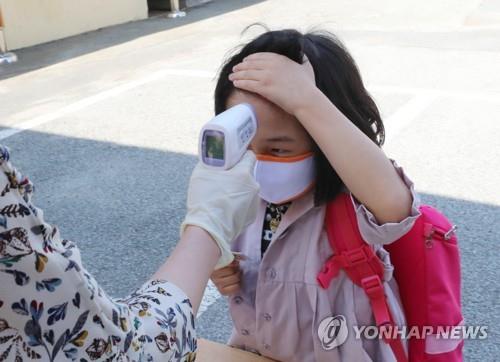