SEOUL, June 2 (Yonhap) -- The ruling Democratic Party (DP) submitted a letter of request for the convocation of the new chamber's inaugural session Tuesday, pushing forward with its plan to activate the new National Assembly on time despite an ongoing bipartisan row over the naming of standing committee chairmen.

The National Assembly began its new four-year term on Saturday but the DP and the main opposition United Future Party (UFP) are at odds over how to distribute the chairman posts of the chamber's 18 standing committees, in particular, the legislation and judiciary committee and the budget-accounts committee.

The UFP insists that it will agree to the opening of the inaugural session of the 21st National Assembly only if an agreement is made with the DP over the appointment issue. It is demanding the DP give up the chairman seats of the two committees.

Defying the resistance, the DP, which controls 177 seats in the 300-member assembly, submitted the letter to the chamber in cooperation with minor left-leaning parties, including the Justice Party.

The motion, backed by more than one fourth of the sitting lawmakers, as required by law, puts the 21st National Assembly on course to convene its first extraordinary session on Friday.

Friday is the legal deadline for the new chamber to host its inaugural session.

The DP is willing to unilaterally go ahead with the necessary appointment of the committee chairmen and the parliamentary leadership, according to party officials.

"The DP will do its best to appoint the new parliamentary leadership and the heads of the standing committees (during the session) within the legal deadlines," Rep. Cho Jung-sik, the head of the DP's policy committee, said during a party meeting on Tuesday.

The proposed unilateral action by the DP is likely to further raise the ire of the main opposition.

Under the National Assembly Act, the 21st chamber is required to fix the lineup of committee chairmen by June 8 and the majority DP is legally empowered to take all the 18 seats.

As the partisan strife is feared to overshadow the new parliamentary term, however, the DP is leaving room for further negotiations with the opposition bloc.

"In accordance with the law and its principles, the DP will continue its negotiations (with the UFP) over the appointment issue," a DP official said. 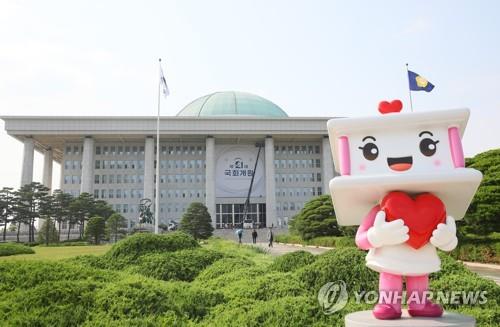