The government plans to begin offering UAM services initially with one to two routes, or terminals, in the Seoul metropolitan area in 2025 and then to increase the number of terminals to 10 by 2030, the Ministry of Land, Infrastructure and Transport said in a statement.

"The ministry will join hands with Hyundai Motor Group and other local companies to push forward the UAM commercialization project," a ministry official said, without elaborating on the partnerships. 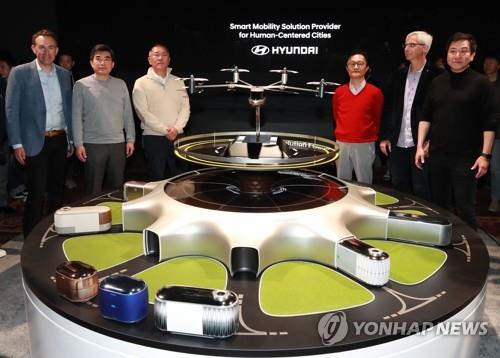 The ministry expects the UAM market to reach 13 trillion won in 2040 and that UAM services will bring customers to their destinations much faster than public transport services, like buses and subways.

The UAM services are designed to travel 30 to 50 kilometers in urban areas, offering transport services in connection with buses, the subway and personal mobility, like electric scooters and kickboards, the statement said.

To promote the UAM services, there should be a "comprehensive industrial ecosystem" in which companies manufacture an air vehicle for the services; offer maintenance, repair and overhaul (MRO) services; and provide flight control systems and insurance services, the official said.

UAM is a key future innovation business that could help overcome urban challenges, like traffic congestion, as well as connect the sky and the ground.

During the Consumer Electronics Show held in Las Vegas in January, Hyundai Motor Co. unveiled the S-A1 personal air vehicle (PAV) concept jointly developed with Uber Technologies Inc., and the PAV is a core part of the UAM services.

Hyundai's first concept PAV S-A1 is equipped with electric vertical takeoff and landing and is designed to carry five people, including a pilot. It will be operated initially by a pilot during the early stage of commercialization and driven autonomously once the relevant technologies are developed.

Hyundai said UAM will be commercialized in 2028, and the UAM services will be offered first in overseas markets.

UAM is one of three innovative mobility solutions sought by Hyundai Motor Group, along with purpose built vehicles (PBVs) and the Hub, a place for mobility transfer and community activities.

PBVs allow passengers to enjoy tailored services while traveling to their destinations. Upon personalization, PBVs can function as restaurants, coffee shops and hotels, or even clinics and pharmacies, in addition to being urban shuttles.

PBVs and UAM connect at the Hub, which will be installed across future cities to form a mobility ecosystem. The Hub has a skyport for the PAV on the top and docking stations on the ground for PBVs to approach and depart from multiple directions.

Around 200 companies, including Boeing, Airbus, Hyundai Motor, and Toyota Motor Corp., have jumped into the PAV and UAM business to seek new growth drivers in the rapidly changing automotive industry, Hyundai said. 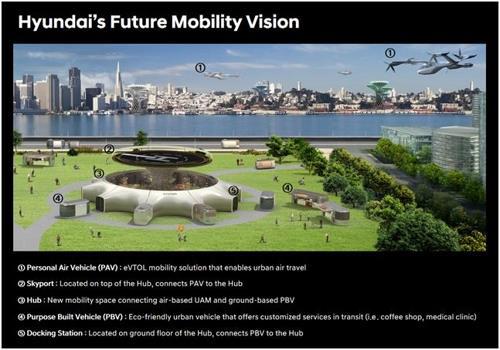