The value of unfair in-house transactions by 208 conglomerate subsidiaries came to 8.8 trillion won (US$7.2 billion) last year, down 32 percent from two years earlier, according to the data by corporate tracker CEO Score.

Internal transactions accounted for 11.9 percent of their total sales in 2019, down 1.7 percentage point from 2017.

The current regulations ban inter-affiliate trading within a business group whose owner and family hold 30 percent or more of listed affiliates. For unlisted subsidiaries, the limit is 20 percent. 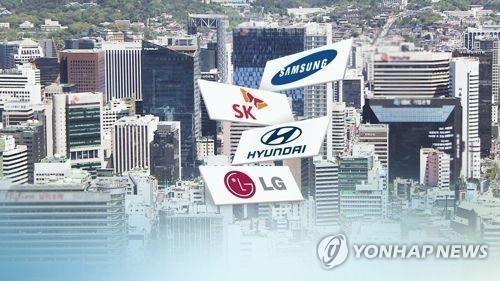 Such trading is blamed for allowing owner families to easily net large profits by having subsidiaries award lucrative contracts to each other, undermining the principle of fair competition.

Those family-oriented conglomerates, known as chaebol here, have been moving to sever ties with affiliates run by founders' family members to avoid tougher regulations on intra-group deals.

There have been growing calls in the country to curb chaebol's economic dominance and to level the playing field for small and medium enterprises. Currently, violators of the fair trade law are subject to up to three years in prison or a maximum fine of 200 million won.
(END)