SEOUL, June 3 (Yonhap) -- An alliance led by an estranged sister of the Korean Air chairman said Wednesday it has raised its stake in the carrier's parent Hanjin KAL Corp. to over 45 percent in the latest attempt to control airline conglomerate Hanjin Group.

The move came more than two months after Chairman Cho Won-tae's elder sister Hyun-ah -- known for her "nut rage" incident in 2014 -- failed to dethrone the chairman of Korean Air Lines Co. and Hanjin Group in a family feud. 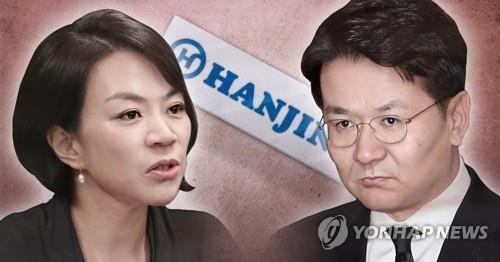 The current chairman had sparred with Hyun-ah, 45, as she formed the alliance with the KCGI and Bando in January and argued that inviting a professional manager would help improve the group's management, financial status and shareholder value.

The alliance recommended Kim Shin-bae, former executive vice chairman at SK Group, as professional manager to replace the current chairman. But shareholders voted against the proposal at a shareholders meeting in March.

Analysts have said if the alliance continues to increase its combined stake in Hanjin KAL and attempts to gain control of the group in the coming years by holding an extraordinary shareholders meeting, it will remain a major threat for the group's current management.

Worse still, the chairman will have to manage the new coronavirus crisis and then prove his management capabilities during his three-year term as executive director to gain support from shareholders, they said.

Korean Air has suspended more than 90 percent of its flights on international routes since March as countries have strengthened entry restrictions on incoming passengers.

This month, the national flag carrier has resumed flights on 13 long-haul routes, which include those to Washington, D.C., Seattle, Vancouver, Toronto, Frankfurt, Singapore, and Kuala Lumpur as it prepares for increased travel demand after countries ease entry restrictions.

With the resumption of 13 routes, it currently serves 101 flights a week on 26 international routes. But it is still sharply lower than around 900 flights on 112 long-haul routes seen before the airline industry was hit by the pandemic.

Its net losses deepened to 736.86 billion won (US$598 million) in the January-March quarter from 116.95 billion won a year earlier due to the COVID-19 pandemic.