SEOUL, June 3 (Yonhap) -- The South Korean prime minister called on rival parties Wednesday for a swift opening of the newly elected National Assembly as the government seeks to win the final parliamentary approval for its third COVID-19 response extra budget this month.

Endorsing the extra budget proposal of 35.3 trillion won (US$29 billion) in an extra Cabinet meeting, Prime Minister Chung Sye-kyun said, "There's a heap of issues the National Assembly needs to discuss besides the extra budget.

"I urge the main and opposition parties to take a broader perspective to open the door of the 21st National Assembly promptly," the prime minister noted.

In a unilateral action, the ruling majority Democratic Party submitted a formal request to open the inaugural session of the new chamber Friday.

But the main opposition United Future Party is insisting that it could agree to the chamber's opening only if the ruling party gives up key committee head posts, a point the DP is brushing aside. With or without the opposition's participation, the assembly is on course to convene the opening meeting Friday as requested.

The prime minister said the government will submit the budget bill to the National Assembly on Thursday.

"The government earmarked the record high extra budget, carrying its strong determination to safeguard the ailing livelihoods of people and to speedily recover the economy.

"The government will focus its fiscal power on pumping emergency funds to the economy's core industries, assisting crisis-hit small business owners and companies, and sustaining and creating employment," the prime minister said.

The government is seeking to have the bill pass through the parliament in June.

Once approved by the parliament, the government plans to spend more than 75 percent of the extra budget within the next three months to cushion the economy from pandemic fallout. 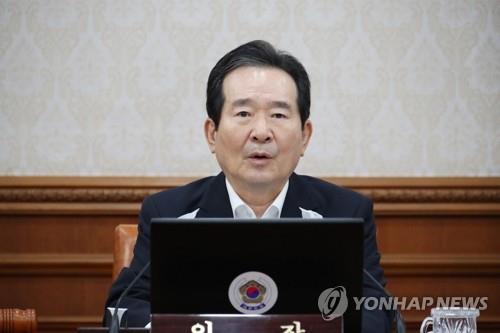