SEOUL, June 3 (Yonhap) -- Unification Minister Kim Yeon-chul held a videoconference with the head of the World Food Programme (WFP) on Wednesday and discussed plans to provide aid to North Korea, his office said.

In the conference, WFP Executive Director David Beasley explained the need to cooperate in providing assistance to North Korea amid the global coronavirus pandemic and urged South Korea to play an active role, the ministry said in a press release.

"The South Korean government has a strong vision to build a 'biotic community on the Korean Peninsula' through cooperation with North Korea and the international community," Kim said, and expressed his appreciation for WFP's contribution in helping the North.

The ministry did not elaborate on what specific plans or issues were discussed.

It also said the two sides signed a memorandum of understanding (MOU) to strengthen cooperation for the next five years.

The talks were set up at the request of the U.N. food agency and were held through a videoconference in consideration of concerns over COVID-19, the ministry said. 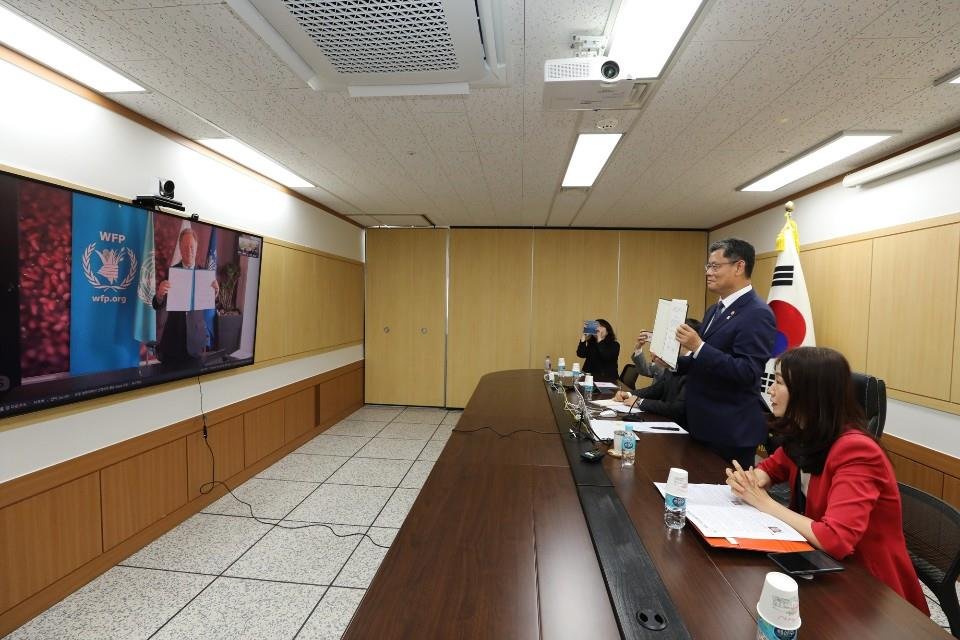 The videoconference comes as North Korea is facing chronic food shortages caused by crippling global sanctions and unfavorable weather. Things appear to be worse due to the global coronavirus pandemic, which prompted Pyongyang to close its border with China, hampering regular shipments of food imports.

Beasley visited South Korea in May last year and met Kim and other government officials and expressed concerns over the North's food shortages.

His visit to Seoul followed a gloomy report by the agency and the Food and Agriculture Organization (FAO) on food situations in North Korea.

About a month later, the Seoul government announced a plan to send 50,000 tons of rice to North Korea through the WFP, though its shipment has not been made amid chilled inter-Korean relations.

The government also donated $8 million to the WFP and the U.N. Children's Fund (UNICEF) for their projects in North Korea to support the nutrition of children and pregnant women and address their health problems.

Chronic food paucity appears to be taking a toll on its people's health.

The FAO and two other organizations -- Johns Hopkins Alliance for a Healthier World and Global Alliance for Improved Nutrition -- said in a recent report that around 48 percent of the North's population is facing "undernourishment."

The figure is much higher than the global average of 11 percent and the East Asian average of 8.4 percent.

The report is in line with the FAO's assessment earlier this year that North Korea is one of 44 countries that need outside food support.

North Korea has claimed it recorded a bumper harvest last year, but the unification ministry said that the North might be facing a shortage of around 860,000 tons of grain this year.