SEOUL, June 3 (Yonhap) -- "Blank Ji-hyo" is actress Song Ji-hyo's nickname in the popular reality show "Running Man" for her occasional habit of spacing out or her blank look on her face during games even after hearing the instructions.

At the same time, she is cunning and resourceful enough to win multiple challenges and outsmart her male peers even though she is the only female cast in the highly challenging and tough action variety show.

While "Running Man" has created Song's tomboyish image and given her international fame for the past decade, Song said it did not affect her choice to star in the upcoming thriller "Intruder."

"I was moved by the character, which is opposite to my usual image," Song said in an interview Tuesday. "I've been with 'Running Man' for 10 years, and I think I've rarely played some dark, serious characters over the period."

Directed and written by Sohn Won-pyeong, "Intruder" tells the story of a family experiencing a whirl of suspicion and anxiety after a daughter returns home who went missing 25 years ago.

Song takes the role of the missing daughter, Yoo-jin, who is outgoing and friendly, but her cryptic and idiosyncratic behaviors cause mistrust in her neurotic brother Seo-jin, played by Kim Mu-yeol.

"She's lovely and tries to be a member of the family in the beginning, but she gradually reveals her real intention," she said. "As her attitude changes, I tried to wear different clothes and hair styles and put on different colors of lipstick."

Yoo-jin is quite a strange character for those familiar with her "Running Man" antics and skittish image, but Song said Yoo-jin is in line with her early-day roles.

The 38-year-old actress made her silver screen debut with the horror film "Whispering Corridors 3: Wishing Stairs" (2003) and starred in the crime thriller "Some" (2004).

Then the versatile, hard-working actress built her acting career in various genres like action movies, comedies, romance TV series and historical dramas for about 20 years. She has 13 big screen project and 10 TV series on her filmography.

"I'm so curious that I want to do or have everything that I can't do or have," she said. "Consequently, I don't have a certain tendency to choose a project. It's like a mixed bag." 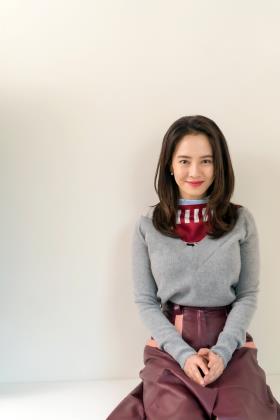 Now, she eyes an innocent and pitiful character that she has not yet taken part in.

"I still have a lot things to do and want to do. I haven't played a girl with an image of innocence and purity, or starred in a tragic drama," she said. "I will do everything that I haven't experienced. I won't hesitate."

"Intruder" will hit local screens Thursday as the first commercial movie to be released in South Korea after the start of the COVID-19 pandemic.